Department of Agriculture, Water and the Environment – Agri-Business Expansion Initiative

The Australian Government is investing $72.7 million to help Australian agribusinesses expand their export markets in 2021 as part of the Agri-Business Expansion Initiative.

For more information on the Agri-business Expansion Initiative, visit www.agriculture.gov.au/market-access-trade/agri-business-expansion.

International trade is a key component of the Australian seafood industry

Australia exports about half of its annual fisheries and aquaculture production by value, specialising in high unit value products for the growing Asian market. As a trade-exposed industry, the seafood sector is subject to trends in world markets, global market disturbances (such as COVID-19), key trading partners and the effect of Australia's exchange rate on the price received for exports and for competing imports.1

One of the most significant threats to Australian seafood exporters is the current lack of market diversification.

Dependence on limited Asian export markets carries significant commercial risk as was evident during the Severe Acute Respiratory Syndrome (SARS) outbreak in 2003 and more recently the COVID-19 outbreak. The Australian seafood sector is increasingly looking to further develop alternative global export markets such as the United Kingdom, the European Union, the United States and India in order to minimise risk exposure.

In 2019-20, seafood exports totalled $1.4 billion or about half of the total value of production.2 Seafood exports were down eight per cent on the previous year largely as a result of the effect of COVID-19 on global trade in the second half of the reporting period and ongoing trade tensions with China. 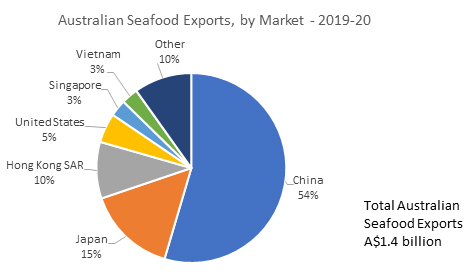 Five seafood products accounted for 79 per cent of total Australian edible and non-edible seafood exports in 2019-20. (See figure 2.) They included: 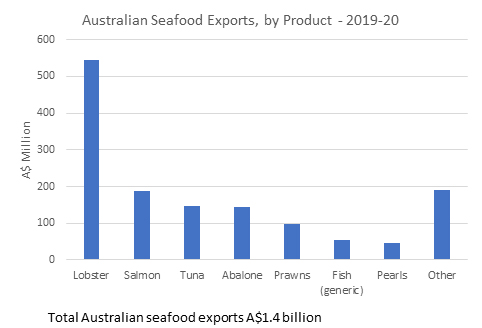 Despite the importance of Australian seafood exports to the profitability of the industry, Australia is a net importer of seafood. In 2019-20 Australia imported seafood valued at $2.1 billion from 97 countries. Six key countries accounted for 72 per cent of total Australian seafood imports. (See figure 3.) They included: 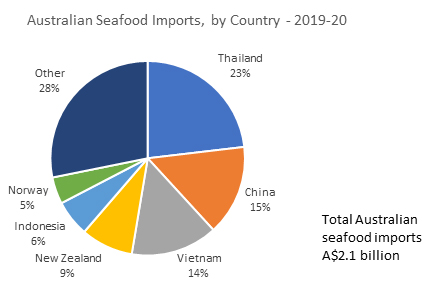 Six seafood products accounted for 77 per cent of total Australian edible and non-edible seafood imports in 2019-20. (See figure 4.) They included: 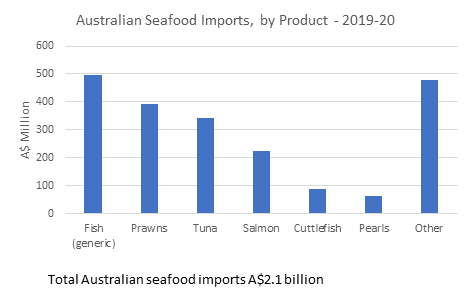