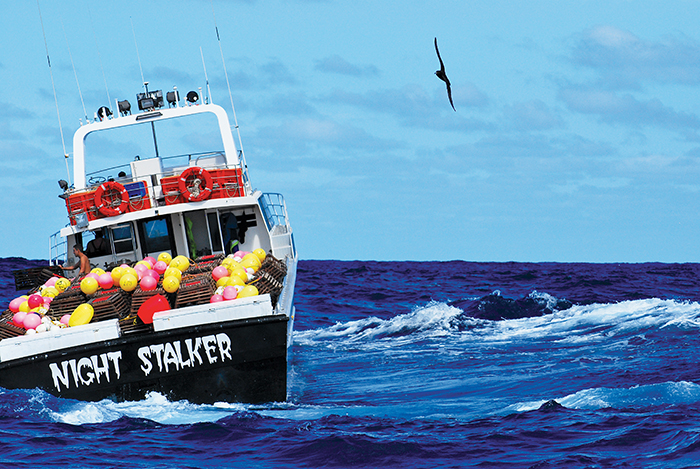 Rock lobster fisher Bruce Cockman is committed to making safety a priority for his crew.

Two-way collaboration, including sharing the knowledge and experience of people who work at sea, is fundamental to the Australian Maritime Safety Authority’s (AMSA) approach to providing regulatory services to the domestic commercial vessel industry.

As the national regulator since July 2013, AMSA is responsible for the safety of vessels and seafarers operating in the domestic commercial industry. This safety oversight will expand from July 2017 to also include a national safety regulation role to provide regulatory consistency to marine industries across the country. This is being implemented under the National System for Domestic Commercial Vessel Safety (National System).

AMSA strives for a relationship where owners, operators and other industry members can be a part of creating a national system that aligns safety outcomes with more consistent regulation.

AMSA is seeking input from industry on the proposed changes to legislation and the way AMSA plans to offer its services from July 2017. This includes talking to operators, crew and others in the industry about their experiences. These conversations inform regulatory changes and help AMSA achieve simpler regulations and safer operations. An example of such engagement is between AMSA and Western Australian fisher Bruce Cockman, who explains how a close call that happened on his boat changed the way he thinks about safety.

“The boat broached down a big wave at Big Bank, north of the Abrolhos Islands,” he says.

“The boat was sideways and the deckie was 20 metres off the boat in the water hanging onto the deck hose. We hadn’t done any drills at the time and all the pots had fallen into the water and all the ropes were tangled so there was nothing to throw to him. The life ring was above our heads, but we didn’t think of that at the time. That’s where doing drills comes in; nothing like that has ever happened since but, if it does, we’ll know what to do.”

Bruce Cockman mainly fishes for rock lobsters off the coast of Dongara, WA, as part of his family company. He also does some wet-lining for Western Australian Dhufish and Snapper in that area and he holds licences in other fisheries as well.

He admitted that when he first started fishing, safety was not high on his list of priorities.  “We didn’t have any safety guidelines. We would just be diving on pots ourselves and it was all probably a bit crazy, but nothing happened to us. There always used to be a lot of boats around. You could always see two or three boats from wherever you were fishing. But now the fleet is shrinking,” he says.
“Where I go on the fishing grounds there’s no one around. I’ll often go two or three weeks without seeing another boat, so safety is important.”

In the past, Bruce Cockman did not do any practice drills or have safety procedures in place, but since the incident at Big Bank his working practices have improved.

“For the man-overboard drill we’ve now got harnesses and a procedure to pull people on board – so next time we’ll remember the safety equipment,” he says.

“We’ve got a safety management plan, which we’ve had for the last couple of years. A consultant came on the boat and helped us make a basic plan. The next step will be to upgrade it, but the drills are there.”

He says his crew often ask why they have to drill when other boats do not: “But things do happen and I want to be ready when they do.”

Luckily, at Big Bank everything turned out fine, but Bruce Cockman admits it took about three hours to sort everything out and several crew members were injured. Now his boat is fitted with Emergency Position Indicating Radio Beacon (EPIRB) stations and he makes a point of training his crew to use them.

He has also replaced his rigid life raft. “Now we anchor out a lot, and inflatable life rafts are a good thing. If you’re going to go over you want to be in one of them” he says.

When asked about the National System, which began in July 2013, Bruce Cockman is hopeful.

“As long as the National System brings consistency between all the boats, it will be positive.”