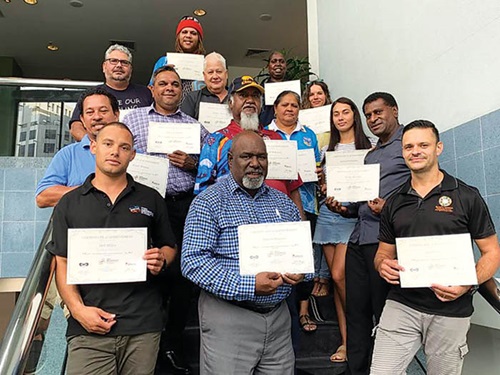 Fisheries science and management have many concepts in common with Indigenous community practices, but the lack of a shared language has often made it difficult to bring the two together. Finding ways to do just this was the aim of an inaugural Indigenous fishery capacity-building workshop held in Brisbane earlier this year.

Organised by the FRDC’s Indigenous Reference Group (IRG), the three-day event was designed to help Aboriginal and Torres Strait Islander (ATSI) people participate in fisheries management discussions and strengthen their voice in the decision-making process.

Capacity building starts with clear communications, says chair of the IRG, Stan Lui, who is also an environmental program manager with the Torres Strait Regional Authority.

“The concepts around fisheries management among Indigenous and non-Indigenous people are similar, but are just couched in different terms,” he says.

When Indigenous communities talk about storylines, this equates to migratory patterns in the equivalent scientific terminology, he says. Management speak, such as biomass limits (BLIMs) and total allowable catches (TACs) have their equivalent in Indigenous practices, learned in childhood. For example, to never take as much as you can, but always leave some behind to regenerate so that there is more to harvest next time.

“This project is about making those linkages and giving ATSI people a broader understanding. So when they’re in fisheries meetings or talks they understand exactly what the terminology means and the concepts behind it. We are building bridges between people and pulling down barriers,” says Stan Lui.

Fifteen Aboriginal people from around Australia who are passionate about fisheries attended the workshop, gaining greater knowledge about management practices and the terminology used in policies and regulation, as well as sharing issues important to them.

Sessions included understanding the protocols and structures of management meetings, stock assessment methods and fishery management frameworks, among others.

Victorian Fisheries Authority Aboriginal project officer Mike Gilby attended the workshop as both a presenter and participant, and says it provided a two-way learning process helping both sides to better communicate and understand terminology used by ATSI people, and how that aligns with management-speak.

With greater understanding, he says, more opportunities will emerge for Indigenous input, or “buy-in” into management tools such as harvest strategies as they are being developed.

Murrah Keys, a Worimi woman and former physical education teacher who also attended the workshop, says she has responded to the calling of her ancestors – saltwater people from Karuah in northern NSW – and is in the process of acquiring an oyster lease.

She says that in bridging language barriers, the workshop demystified the industry and has helped her negotiate bureaucratic obstacles on her path to a future in fisheries. Connecting with other Indigenous people in the industry from around the country was also a powerful outcome for her.

“As we break down these language barriers our people will be able to step confidently into this space. The program has created pathways for all of us,” Murrah Keys says.

Capacity building is a key priority for the FRDC’s IRG. The overall aim of the capacity-building program is to have more Indigenous men and women participating actively in fisheries. Ultimately, Mike Gilby says, it is about succession planning for Indigenous communities.

“It’s giving people the skills to participate on-country, in their own jurisdictions or more broadly at the fisheries management, industry or community level,” he says. “It’s inherent within Indigenous people – we have a responsibility to transfer our knowledge and share that with the next generation so they can grow, and get on with it.”

Resources developed for the workshop are expected to be available from the FRDC website once the project is completed.