As oyster production rebuilds to near normal following the devastation of disease in Tasmania, producers continue to focus on research and management that will improve the industry’s resilience 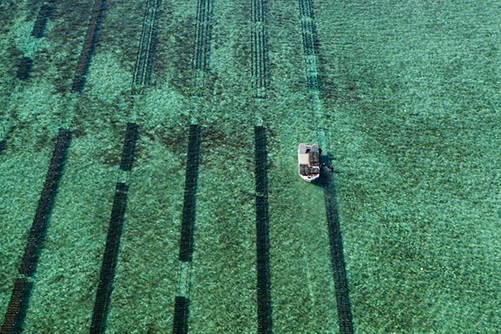 When Pacific Oyster Mortality Syndrome (POMS) all but wiped out southern Tasmania’s Pacific Oyster (Crassostrea gigas) farms in February 2016, there was a very real fear the industry, nationwide, was facing long years in the wilderness. The devastating impact of POMS on New South Wales growers in 2010 – Australia’s first outbreak of the disease – was still fresh in the minds of oyster growers around the country. The French and New Zealand experiences with POMS, caused by the Ostreid herpes virus 1 (OsHV-1), also suggested a five to seven-year recovery period.

And Tasmania was not the only state affected. As the provider of 90 per cent of the oyster spat used in South Australia and NSW (see breakout), the Tasmanian outbreak severely affected growers in these states too. But just three years on, producers in SA and Tasmania are nearing pre-POMS capacity, and production systems are leaner, more efficient and more ambitious than ever.

This comparatively speedy recovery is the result of industry foresight and proactive research efforts, frequently funded by the FRDC, that followed the first outbreak in Sydney’s Georges River, NSW.

As one of Tasmania’s leading oyster hatcheries and producers, Shellfish Culture Ltd, lost about 130 million Pacific Oysters in the 2016 outbreak and the business wrote off several million dollars that year.

But even before the disease hit its hatcheries and farms, it had been investigating what could be done to POMS-proof their holdings, looking at what measures producers in other POMS-affected countries had taken. As a result, when the virus struck, the business was able to move quickly.

Shellfish Culture CEO Greg Bowers says the installation of water processing equipment allowed the business to establish a biosecure facility. By September 2016 it was producing Pacific Oyster spat that could be used by oyster growers across Tasmania, including areas not yet affected by POMS. However, supplies to SA were still quarantined.

The business also began its own breeding efforts to increase POMS resistance in its oysters, using broodstock from industry-owned breeding research company Australian Seafood Industries (ASI). ASI has been working on resistant lines since 2010 and is now in its sixth generation of POMS-resistant breeding.

Shellfish Culture’s approach, much like the ASI program, involves deliberately exposing stock to the virus. In the summer of 2018- 19 Shellfish Culture oysters had a mortality rate of about 10 per cent – a far cry from the 90 per cent mortality experienced the first year after POMS hit southern Tasmania.

The SA oyster industry is still classified as POMS-free. Although the virus was detected in feral Pacific Oysters in the Port River in February 2018, it has yet to reach any of the growing areas.

With funding provided by the SA Government, two small SA hatcheries and the South Australian Research and Development Institute were supported to immediately ramp up their production. Two Tasmanian companies – Shellfish Culture and Cameron of Tasmania – were also supported in establishing hatcheries in SA, and ASI established a breeding centre at the South Australian Aquatic Sciences Centre, using broodstock it had maintained in SA.

Funding to support research to accelerate breeding for POMS resistance in both Tasmania and SA was provided through the $5 million Future Oysters Cooperative Research Centre Project (CRC-P).

In June this year, South Australian Minister for Primary Industries and Regions SA Tim Whetstone also announced new research funding ($756,428) for three more years to develop Pacific Oysters resistant to POMS. There are a number of funding partners including FRDC. The project will build on previous work done.

With new sources of spat, production in SA is slowly recovering, although growers have had to rely on much smaller, two millimetre-sized spat for the past few years. These less robust, smaller spat have a higher natural mortality rate and take longer to grow to market size.

Fortunately, spat of four to five millimetres has been available from SA hatcheries this year. Trudy McGowan says the state’s Pacific Oyster farms are now full of stock, although not yet at full production: “We’re hoping that there will be reasonable quantities by this Christmas, but it’s still not back to normal levels.”

With the ongoing threat of a POMS outbreak, SA has implemented an active surveillance and education program in conjunction with its own disease-resistance breeding efforts.

“In another couple of years, stocks out there will have really good POMS resistance, so if the disease does get to us eventually, we don’t believe it will have the same levels of impact on our stock,” she says.

At the Institute for Marine and Antarctic Studies Fisheries and Aquaculture Centre at the University of Tasmania, senior research fellow Christine Crawford and colleagues have been looking at farm management practices that could reduce POMS-related mortality. Their project is also funded through the Future Oysters CRC-P.

One question they examined was whether handling practices played a role in reducing mortality. When POMS struck, there was a widespread belief that reduced handling would reduce mortality. But the research has showed the opposite is true.

“We found that in most places, if they didn’t handle the oysters for several months, then the growth rate was slower and in some places, mortality was higher because of biofouling,” Christine Crawford says.

There were also some surprising outcomes from their surveys of Pacific Oyster farmers, with some saying that POMS has ultimately resulted in a more resilient industry.

“They’re saying that their survival rates are much higher now, largely because of selective breeding but also because of management practices, such as selling before the warm summer weather [when POMS occurs],” she says. Many farms also had to become much leaner and more efficient during the downtime caused by the lack
of spat.

Greg Bowers is one of those with a positive outlook on the industry. “We see a very good future for oysters but you’ve got to believe in the science,” he says. Science and foresight have given Australia’s Pacific Oyster industry a two-year head start on recovery compared to what was experienced by French and New Zealand growers, he says.

“If you talk to farmers now, they’ll say they didn’t think they’d be back here in three years,” he says. “It’s good news for the industry.”

Most Pacific Oysters farmed in Australia are diploid – meaning they have two sets of chromosomes, like humans. But there is increasing interest in triploid oysters, with three sets of chromosomes, because they are sterile and therefore do not spawn. Pacific Oysters are exotic to Australia and are listed as a ‘noxious fish’ in NSW, where they can outcompete the native Sydney Rock Oyster. For this reason only sterile triploids can be used in aquaculture in the state.

“The reason that Pacific Oyster farming in the Hawkesbury and Georges Rivers in NSW hasn’t recovered as well as Tasmania is because they only use triploid oysters in those estuaries and we haven’t had a POMS-resistant triploid product available,” says Matthew Cunningham, general manager of the industry-owned breeding company Australian Seafood industries (ASI).

With funding from the FRDC, ASI is working on how to transfer POMS resistance to triploid Pacific Oysters. Success could result in a viable oyster for farmers in NSW rivers, where Sydney Rock Oysters cannot be grown due to another disease – QX – having previously devastated production of these native species.

But it’s a tricky prospect, says Matthew Cunningham. “We’ve talked to the French researchers and New Zealanders; they’re suggesting that it happens, but we haven’t seen hard and fast data around it, hence the research project to see whether it’s viable.”