Recent research from the FRDC sheds light on the consumption habits and experiences of Australian seafood consumers, providing a refreshed understanding of the challenges facing the seafood industry 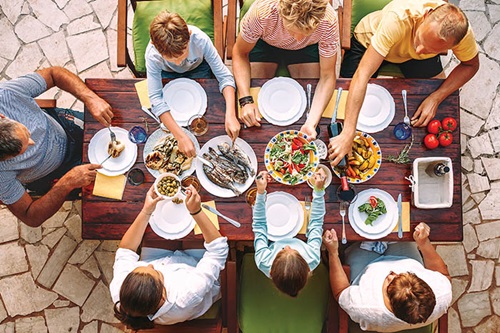 In an ideal world, seafood producers would have telepathic abilities to help them know exactly what their customers want and need from the industry. But in the absence of such supernatural abilities there are market research companies who do the next best thing by asking consumers about their decisions concerning seafood.

New data from the FRDC’s 2019 Unpacking the Consumer Seafood Experience survey, undertaken by market research agency Intuitive Solutions, captures a wealth of information on Australian seafood consumer attitudes, what they like and don’t like, and what information would be useful to help them overcome the challenges they have in buying, cooking and eating seafood. The survey is the second of this kind the FRDC has undertaken.

“The first survey in 2016 showed that consumers don’t like the smell associated with seafood, are often unsure regarding its preparation and are also cautious about trying varieties outside of their regular purchases,” says Peter Horvat, FRDC’s general manager of communications, trade and marketing.

“These all highlighted a lack of consumer information and education.

But what the research did show is that consumers were open to new seafood offerings that made choice and preparation easier.

“The 2019 research update used the same basic survey framework as 2016, but added further questions about consumer behaviour and motivation,” he says.

This time, for example, the survey asked where consumers get their information from and broadened the demographic data collected. This has allowed for insights related to the age, location and gender of consumers, which all helps marketers and producers to understand their markets better.

The latest survey also added a range of new questions from the US Food Marketing Institute’s The Power of Seafood survey. Peter Horvat says this provided a valuable reference point to see how Australian seafood consumers compare to those in the US.

The inclusion of data from the Nielsen Homescan (see "Beyond fish fingers"), which captures the grocery purchases of Australians, was used to ground the survey results by providing a second dataset from which to compare the findings. It also adds a financial data dimension to seafood consumed in Australia. 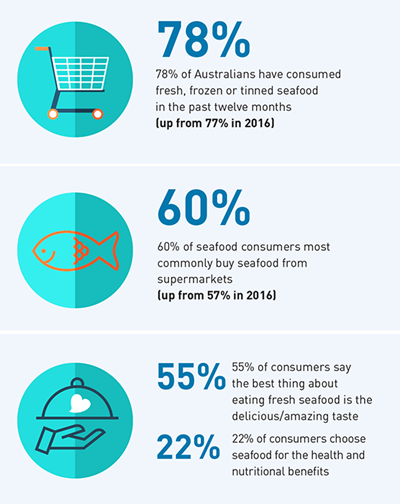 Of those who eat seafood, almost all indicated they eat fresh seafood (92 per cent), frozen (87 per cent) and tinned (86 per cent).

However, the survey found that consumers fall into one of three consumption segments in relation to the frequency with which they consume seafood, namely:

The survey indicated that supermarkets remain the major outlet for the purchase of seafood. This figure is consistent with Nielsen Homescan data.

The FRDC commissions these surveys to help seafood producers understand the barriers to the uptake of their product and to see where they should put their resources to improve seafood purchases and consumption. For example, understanding that most consumers purchase their product from supermarkets can direct seafood producers to develop offerings that are available in such stores.

Moreover, Peter Horvat says understanding that frequent eaters account for such a large proportion of consumption can direct producers to where they can get the biggest bang for their buck. “If you try and convert infrequent eaters to double their seafood consumption, you will only make a small gain overall,” he says. “But if you target your messaging and marketing to increase the intake by those already eating seafood once a week or more, a small increase in consumption by that group is likely to have a far greater impact.”

The 2019 survey results reiterated the 2016 findings that uncertainty about choosing, preparing and cooking seafood remain as barriers to seafood consumption.

“To overcome this, education and information on the different species, what they taste like and how to cook them could be vital, regardless of whether the seafood is fresh or frozen,” says Peter Horvat.

The scores suggest consumers are engaged and enthusiastic, providing seafood producers with the opportunity to encourage consumption of new seafood offerings.

For fishers who catch and supply the most well-recognised and commonly consumed species, the research indicates that the focus should be on packaging, presentation, improving ease of use (meal solutions) and preparation tutorials.

For fishers who catch and supply lesser-known species, investing in consumer education, information and tastings might be better options.

For seafood processers, the results show that consumers are open to new products, but they will need to be educated about what the product is and how to use it. These and more findings will be presented at the Seafood Directions conference in Melbourne in October.

Freshness
How long has the seafood been in store? (74%)

Price
How does the price compare to other meats? (71%)

Quality
Is it fresh or has it been frozen?(66%)

Presentation
How long will it last at home? (63%)

FRDC resources developed to help seafood producers overcome barriers to consumption of seafood identified in 2016 and 2019 consumer surveys include the following:

Fishfiles consumer website
Provides videos for seafood consumers on how to prepare and handle seafood, along with recipes and species information. For more information click here.

Fresh versus frozen seafood research
Frozen seafood overcomes smell and freshness issues that consumers have identified as barriers to eating more fish. The FRDC commissioned research (2017-179) that has challenged the long-held assumption that fresh seafood is of superior quality, reported in FISH magazine (March 2019, ‘Seafood quality frozen in time’).

Fish, Fresh + Frozen
Cookbook based around frozen seafood, in press, will be launched at the Seafood Directions conference in October 2019.