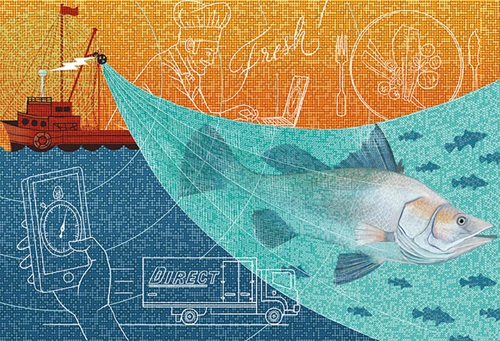 Digital marketplaces, much like their traditional counterparts, can bring together large numbers of buyers and sellers to ‘discover’ new opportunities and products. But unlike their traditional counterparts, the digital alternative removes the need for the buyers and sellers to be physically present at a specific time and location.

Participants could be based almost anywhere and trading at any time of night or day, coordinating direct delivery of fresh, frozen and even processed product to its final destination.

By reducing the number of times seafood changes hands, these platforms facilitate faster, fresher delivery, which has the potential to improve the final consumer eating experience. Improved traceability, transparency and the prevention of seafood fraud are other potential benefits.

Features that digital platforms may incorporate include confirming the rights of the fisher or seller to sell fish, credit checks on buyers, credit and product insurance, secure payment systems, financing, customs or other regulatory clearances, end-to-end traceability and logistics services to deliver product to the buyer’s door. Automation of as many processes as possible is key.

Some of the first commercial digital platforms in the seafood sector, such as FYSH-X in the US, launched almost a decade ago but have failed to gain widespread support. Fishing remains a highly traditional industry built on personal connections from one stage of the supply chain to the next; it has proven difficult to gain traction online.

However, the growing number of digital markets now establishing around the world – including some Australian-based platforms – suggests a step-change may be occurring, with more industry participants taking advantage of digitally mediated opportunities.

Rabobank has valued the global fish and seafood trade at US$153 billion. Estimates for online sales published last year by Russian digital marketplace Yorso suggested that less than 0.7 per cent of this trade is occurring online. However, Yorso’s founder, Anton Trantin, says business-to-business online trade is expected to grow by 100 to 300 per cent worldwide in the three years to 2020.

Futurist Brett Wiskar, who presented at an Australian Prawn Farmers’ conference last year, says access to new markets is a key benefit to online trading platforms for sellers. He is chief future officer at an international project management company, Wiley, and has been involved in the development of trading platforms himself as digital technologies have matured over the past 20 years.

Digital platforms offer more than just ecommerce ordering and payment programs, although they do incorporate these functions, he says. What they do that is more transformative is build in the capacity to overcome barriers that may otherwise prevent buyers and sellers from entering new markets.

Those barriers could be physical or cultural. For example, fishers may well want to try selling their seafood into new markets, possibly direct to restaurants or overseas. But they may not know how to do this – where to find buyers, how they need to package their product, the availability of cold chain logistics or the paperwork needed.

By connecting buyers and sellers directly, digital marketplaces can remove stages or players in the value chain and create a fundamental shift in the cost of getting a product from its source to a market. Markets that were once inaccessible can be transformed into viable destinations for produce. Furthermore, this can dramatically alter the cost of goods in an existing market, he says.

Emerging digital seafood marketplaces are dynamic, with several models in the mix. Some offer commissions on trade, fees for service and memberships.

One platform might use anonymous listings and only reveal the parties once the trade is confirmed. Another platform will encourage fishers to brand their product and market their identity to earn premiums for the care they take with their catch.

Some platforms include futures or forward contracts, but others expressly forbid trading any product that is not in the hands of the seller when it is listed. Some are single-destination platforms or single species. Others trade diverse seafood species or across many borders, particularly in Europe. As not all platforms operate the same way, companies using them should do their due diligence to understand exactly how they work – who is responsible for different elements in the transaction, such as transport, and what are the total costs of use.

ShoreTrade is Australia’s latest entrant to the digital marketplace, although founder Peter Manettas has been running Manettas Seafood Market as an online consumer-facing business for the past three years.

The new B2B platform launched this year is “an entirely different beast”, he says, which aims to provide value to both ends of the supply chain. The business operates on a commission basis and has sellers listing product from Australia and New Zealand. Buyers must be in Australia, but the platform aims to expand this to a range of other countries.

Using the platform’s app, fishers can list their catch even as they are returning to shore. Their listing will be pushed to buyers across the country and to an emerging base of international buyers. They can even list product before they have caught it, effectively fishing to order, where they can be certain of their catch.

Buyers could range from restaurants, wholesalers and fishmongers, or even a processer, who can value add in some way and relist the product for sale. The platform integrates logistics, linking in real time to 65 cold freight carriers as well as airlines to organise delivery immediately.

“Each state has its own laws for the sale and delivery of seafood and we’ve built those laws into the system. From the back end, when we authorise an account, our due diligence includes sighting a fishing licence and incorporating any sales restrictions that might apply,” Peter Manettas says.

The process of developing the app, which has taken almost two years, has highlighted possible opportunities to standardise seafood trading laws across Australia, which could improve transparency across the whole industry, online and off. Peter Manettas says improvements in packing materials and processes to hold temperature and maintain product quality could also advance seafood trading in general. “It’s something New Zealand is already doing really well.”

In the long term, he says trade data will be combined with seasonal and harvest information to model pricing throughout the year. Once the confidence level in the data is high enough, this information can be made available to fishers to help them plan their fishing effort and income more strategically.

The other Australia-based platform, TunaSolutions, trades internationally, but only in tuna: Yellowfin, Bigeye, Albacore, Southern Bluefin and Skipjack. Founder Thomas de Kock is a third-generation tuna fisher, originally from South Africa, and says it took two years of research and development to build the TunaSolutions platform, with the assistance of programming experts.

Having worked in the tuna industry all his life, he says he was familiar with all the steps needed to make a trade work, including the paperwork, and it was a matter of working out how to digitise those processes.

His company initially works with sellers – fishers, exporters and processors – providing training in fish handling and grading techniques to optimise the quality of the product, and establishing processes to meet the standards that buyers can rely on in product listings.

Sellers who cannot meet the platform’s basic quality standards for listing are not accepted, although the company often works on longer-term projects to help improve practices, as it is doing in Indonesia.

Thomas de Kock says the right handling practices can increase the value of the product tenfold. For some fishers, this means they can catch fewer fish but still make a good living; the process supports more sustainable fishing and fisheries. The company only works with fisheries where there is good policy and strong regulations to support sustainable management. However, while this approach works for high-value species, it may not apply to volume commodity fishers the same way.

To incorporate full traceability into the system, TunaSolutions has developed and trained fishers to use data capture techniques that do not interfere with fishing operations. This has been possibly the greatest challenge in the whole process, says Thomas de Kock, and smart phones, which most fishers have constant access to, have been crucial in making it happen.

TunaSolutions has sellers in the Maldives, Pacific Islands, the Philippines and Brazil, and expects Australian fishers will join the platform this year. Diverse international buyers purchase products ranging from the highest-grade sashimi tuna to mid-range quality product for processing. A commission is charged on trades, with fees for services including quality inspections, cold chain storage and logistics management.

While B2B seafood platforms are still finding their footing, online consumer trading platforms have been growing strongly in recent years. Amazon, Alibaba, eBay, Airbnb, Uber, Menulog, Wotif and Expedia are among the many consumer platforms that are household names.

But when it comes to highly perishable fresh foods such as seafood, logistics that can be trusted remain the fundamental issue for direct delivery to home customers.

Peter Manettas says the online Manettas Seafood Market only delivers within a specific area in Melbourne, Sydney and central New South Wales coast. Different local suppliers in each location are used to pack and deliver orders.

Even giants such as Amazon, which launched AmazonFresh in 2007, have struggled with the problem of delivering perishable food products. While the service offers fresh and frozen seafood among its products, it is only available in limited locations – major cities in the US, England, Germany and Japan.

Australia’s major supermarkets Coles and Woolworths have also ventured into the online space with basic order and purchase services in addition to their retail stores, and include shelf-stable, fresh and frozen seafood in their online catalogues.

In South Australia, Eliza Ferguson at Ferguson Australia says the company has been operating online retail sales for six years with a range of pre-portioned and packaged fresh, frozen and live seafood.

But even with vacuum-sealed product, well-packaged with ice packs and air freighted, delivery to a customer’s door has proven particularly difficult. As a result, online orders to destinations outside its home base in Adelaide will only be delivered to airports that offer the correct storage capabilities for chilled or frozen foods. Customers need to collect orders directly from the airport.

While still offering its online service, Eliza Ferguson says marketing efforts today are focused more on increasing the company’s products in retail fishmongers and supermarkets, where logistics and quality control can be assured and where people are already shopping for food.

As a business that represents more than 100 fishers, Ferguson is excited about the opportunities of digital wholesale trading. It offers the chance to directly access ‘second-tier’ buyers such as chefs – ultimately reaching many new consumers in the process.

In Norway, the industry-operated Norges Sildesalgslag, or centralised electronic auction system for the trading of wild-harvested pelagic fish, has been operating for decades (see "Cultural exposure sparks new ideas").