Marine life is quick to colonise built structures in ocean environments, leading to a rethink on what happens to such structures at the end of their commercial life.

If you looked at the satellite images of the waters off Karratha in northern Western Australia on any balmy weekend, you would probably see recreational fishing boats bobbing about in unusually straight lines.

These canny fishers have positioned themselves above the most abundant fishing spots in the area, which have formed in some instances around the oil and gas pipeline crossing the sea floor.

When this infrastructure was installed on the North West Shelf in the 1990s, in what was the largest resource development project in Australian history, the regulations on infrastructure removal at the end of the project were very clear. The whole lot had to be removed once the project finished; the sea floor was to be returned to its original state.

But over the decades, marine life has flourished around oil and gas infrastructure, as well as on other structures such as jetties, shipwrecks and artificial reefs. An FRDC-funded project underway is reconsidering the decommissioning process, to determine the social and economic value of these structures. It will, in part, help policymakers decide whether oil and gas infrastructure should remain in place when it reaches the end of its commercial life. It is also assessing the risks and concerns related to leaving these structures in place.

Euan Harvey, professor of marine science in the School of Molecular and Life Sciences at Curtin University, is leading the ‘Enhancing the understanding of the value provided to fisheries by man-made aquatic structures’ project, which is due to report its findings at the end of the year.

Anecdotal evidence suggests commercial and recreational fishers get better catches around pipelines and platforms than on nearby natural reefs. “The biomass of fish populations around some of the platforms around Thevenard Island (off the coast of Onslow in the Pilbara region of WA) are about 200 times greater than on the natural reef,” he says.

The project, designed to calculate the economic and social value of these structures, has a steering committee headed by independent chair Luke Twomey, who is CEO of the Western Australian Marine Science Institution (WAMSI). The committee includes representatives of WA’s peak recreational fishing body, Recfishwest, as well as the Western Australian Fishing Industry Council, government agencies and oil and gas companies.

The research team is also a collaboration of scientists from the University of Western Australia, the Australian Institute of Marine Science, the WA Department of Primary Industries and Regional Development (DPIRD) and WAMSI. 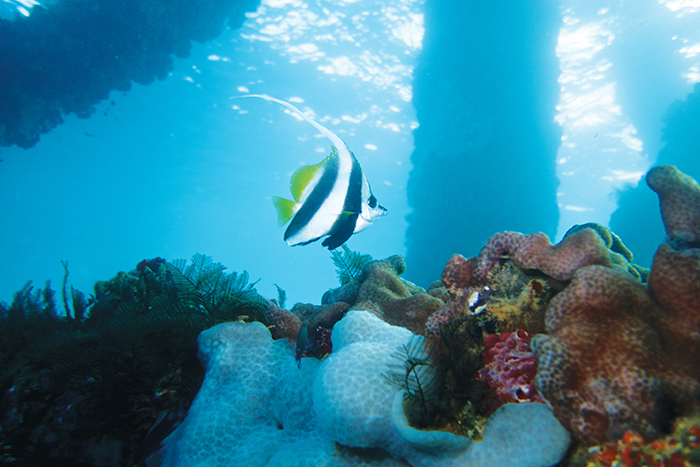 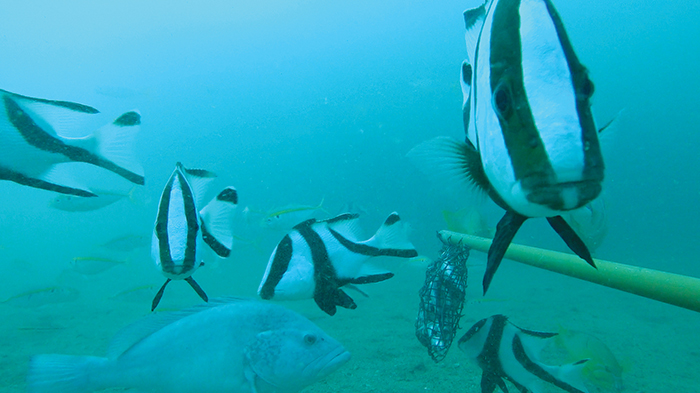 The project is looking at five case studies: the Busselton Jetty; the Exmouth Navy Pier; the Exmouth Integrated Artificial Reef; offshore oil and gas structures in the Echo Yodel field in the North West Shelf; and Chevron’s pipelines and platforms around Thevenard Island.

After reviewing existing research and conducting surveys and focus groups with stakeholders, Euan Harvey says the research has found clear evidence that all five of the built structures do, in fact, have ecological, social and economic value.

Drawing on ecological surveys of the pipelines and platforms near Thevenard Island, they have been able to model the economic cost of removing the structures or, alternatively, transforming them into artificial reefs.

“We can actually start predicting what the benefits to the local economy would be under the different scenarios,” he says. “For example, if it became an artificial reef, what would it mean in terms of extra visitors coming, people fishing, accommodation, boat fuel, and so on.”

Similarly, catch data from commercial fishers, DPIRD and the Echo Yodel field has been used to calculate the economic value of catches from those structures.

Recfishwest chief executive Andrew Rowland says recreational fishers are aware of the benefits of built marine structures, as evidenced by the popularity of the gas pipeline fishing spots near Karratha. “They improve rec fishing experiences, whether that be from jetties which give improved access, or whether it be from the habitat benefits of artificial reefs,” he says.

Busselton Jetty is popular for recreational fishing, scuba diving and tourism, and the 300-metre-long Exmouth Navy Pier is considered one of the world’s top shore dive sites.

And even though recreational fishers are not currently allowed to fish in the exclusion zones around oil and gas platforms, he says the sector recognises the value of the marine life that has grown on, around and near these structures. “From our perspective, we’re looking at the end of life of these structures, how we can capitalise on those ecosystem benefits for new fishing experiences,” he says.
The Exmouth Integrated Artificial Reef, which consists of huge buoys donated by BHP and sunk onto an area of bare sand about four kilometres off Exmouth in mid-2018, is also popular for recreational fishers, especially tourists who may not have much fishing experience.

In just two years, the reef has become home to vast numbers of pelagic fish, as well as demersal (bottom-dwelling) species such as Red Emperor.

“The fish species have gone up by a factor of seven or eight,” says Euan Harvey. “So, tourists know they can go there safely, and they’re probably going to catch a fish. There’s a social value to that.” 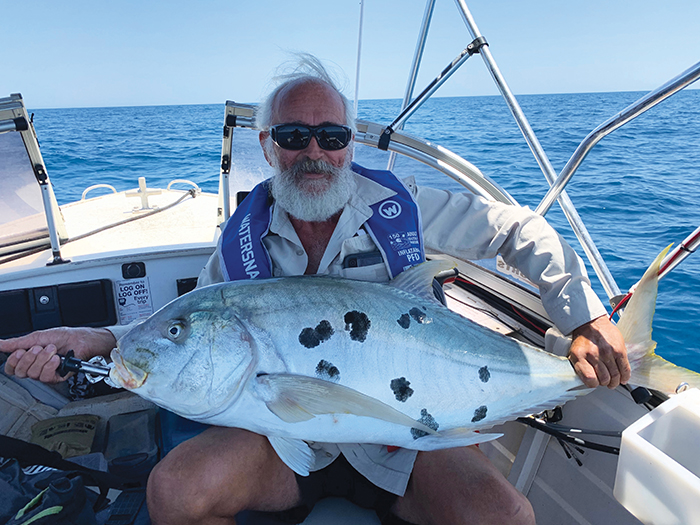 Efforts to finalise the project have been affected, albeit temporarily, by the COVID-19 pandemic restrictions, which stopped researchers from handing out brochures and conducting focus groups to gauge the positions of the various interest groups.

Fran Ackerman, a research professor in Curtin University’s School of Management, tracked down the developers of the focus group software the project had been using at face-to-face meetings and convinced them to create an online version. The software collates and anonymises the responses of participants. With an online version, the remainder of the planned focus groups could go ahead via Webex conference calls.

Concerns raised during focus groups about leaving the structures in place, or deploying new structures, include the potential of chemical leaching into the environment and the long-term legal liability and responsibility for clean-up, if issues are identified 50 or 100 years from now.

Euan Harvey says the project will inform future policy decisions, not only for the decommissioning of built structures in marine environments, but also for the design and installation of future marine infrastructure projects, such as wind and wave renewable energy projects. Structures could be designed with decommissioning and removal in mind.

Removal of current infrastructure under existing guidelines is expected to cause significant local environmental disturbance.

“Some platforms have legs that are a couple of metres across – they’re going to have to blast the sea floor if the regulators want the structure removed at or below the sea floor,” he says. “On some of these structures you have threatened and endangered species. What’s going to happen to them? It’s a really complex issue, where you’re trying to balance the ecological values with the politics and the attitudes of stakeholders.”