It is estimated more than 85 per cent of the world’s shellfish reefs have been lost. Over-harvesting, reductions in water quality run-off and increased siltation have all contributed to the decline. In Australia, reefs were also mined extensively as a source of lime for cement.

But around the world, including in Australia, there are renewed efforts to restore shellfish reefs, driven by the many benefits they provide as building blocks in healthy estuarine and coastal marine ecosystems.

The shellfish that grow on these reefs filter large volumes of water and can improve water quality, while the reef structures themselves help to stabilise shorelines and provide habitat and food for fish and crustaceans.

Oyster shells recycled from restaurants have been used around the world for more than three decades to restore degraded shellfish reefs, especially subtidal reefs located below the low-water mark. Now, as Australia embarks on efforts to restore its own lost shellfish reefs, the FRDC is investing in research to assess the biosecurity risks of using recycled oyster shells for this purpose.

Oyster shells are considered an ideal material to help rebuild reefs as they provide the appropriate chemical signals that tell wild shellfish spat to leave the plankton they are floating in and settle on the reef.

The shells also offer a substrate to restart reef formation. Once sanitised, oyster shells can be placed in the most suitable locations at the right time of year, kickstarting the life cycle of shellfish and the formation of a new reef.

To facilitate restoration efforts while protecting both local environments and oyster industries, the FRDC has commissioned a series of oyster shell biosecurity risk assessments.

Ben Diggles, of the consultancy DigsFish Services Pty Ltd, is conducting the assessment, looking specifically at whether recycled shells are likely to spread shellfish pests and diseases.

His findings will be used to inform the various regulatory frameworks across all the states dealing with treatment of the shells before their use in aquatic environments.

“The document will help reassure managers that if the shells are recycled the right way, there’s no risk of spreading pests and diseases while the reefs are being restored,” he says.

“You want to get all the benefit from the restoration with none of the drawbacks.”

The success of several small shellfish reef restoration trials using recycled oyster shells, undertaken around Australia in the past five years, indicate these benefits may be substantial.

These trials include the community-driven restoration project in Pumicestone Passage on Queensland’s Sunshine Coast. Over three years, the site saw successful multi-year recruitment of juvenile oysters to reefs made from recycled oyster shells. Additionally, the site experienced a 1070 per cent increase in overall fish numbers (including a 1640 per cent increase in harvestable fish species), and a 380 per cent increase in fish biodiversity compared to pre-project baselines.

“We now realise oyster reefs are a keystone habitat for our estuaries and inshore areas,” Ben Diggles says. “That is true for the restored reefs too.

For example, the Pumicestone Passage restoration project has seen an over 16-fold increase in harvestable fish numbers in an area that is open to recreational fishing.”

His biosecurity assessment report is expected to finalised before the end of the year. 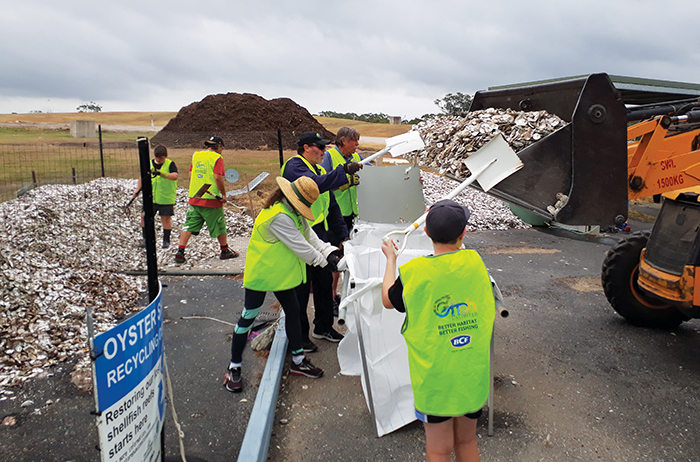 Cleaned and sanitised oyster shells are bagged up, ready for use in reef resoration. Photo: Ben Diggles, DigsFish Services.