Under the surface of the D’Entrecasteaux Channel in Tasmania, the temperature begins to rise, and the pulse of a Pacific Oyster stationed there begins to quicken. The oyster opens its shell to gather an inflow of nutrients from the waters, and CSIRO scientists gather information in real time from these biological and ecological interactions, using a new biosensor technology.

Investigator Ashfaqur Rahman, who leads CSIRO’s data analytics team at Data61, explains that as the environment changes, the behaviour of animals – including oysters – changes in response.

“So, we wondered if we could observe the behaviours themselves to infer what changes were occurring in the environment,” he says.

Bivalves such as oysters have long been recognised for their ability to provide an early warning system for environmental changes on a long-term scale, but this is the first exploration into their potential for real-time monitoring or change prediction.

To measure the impacts of change on oysters, heart rate and shell opening (gape) patterns were monitored via a credit card-sized sensor glued to the bottom shell of a live oyster, and a small magnet glued to the top shell.

The sensor measures heart rate by detecting changes in the level of reflectance from infrared beams on the surface of the animal’s body. As the heart beats, it changes shape, which affects the amount of light reflected back.

A magnetic field is used to measure the angle of the shell gape over time. A magnet is attached to one valve and a magnetic sensor (a Hall-effect sensor) is part of the electronics. Changes in magnetic field strength indicate whether the shell is closed or open, and how widely.

Getting the sensors into the field for testing required careful planning and collaboration between the project team and stakeholders, including the Tasmanian Government, a local marine assessment company Aquenal, and aquaculture operators in the trial area.

Oysters equipped with sensors were deployed with conventional water quality sensors at Coningham and Redcliffs in the D’Entrecasteaux Channel to measure relationships between water quality and animal biology and behaviour. A low-cost radio telemetry interface was installed, feeding live data back to CSIRO. Researchers chose an emerging telemetry technology to trial, called LoRaWAN, which has a long radio range, low power consumption and low running cost.

To narrow down which water quality parameters impact oysters the most, the team began by observing a suite of standard measures that included temperature, conductivity, turbidity, dissolved oxygen (DO), pH, chlorophyll and oxidation-reduction potential (ORP).

“By using a machine learning mapping model, clear relationships have so far been found between temperature and both heart rate and gape pattern, and salinity and heart rate,” says Ashfaqur Rahman. 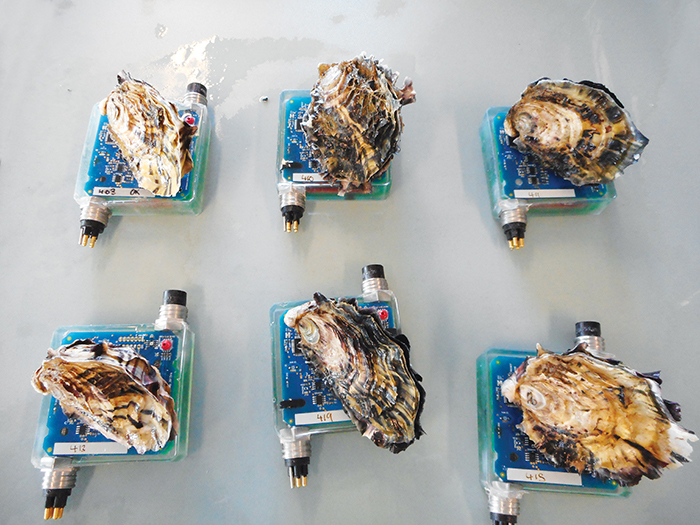 CSIRO senior engineer and project leader for this biosensor research is John McCulloch, who says understanding the impacts of environmental changes on oyster biology could provide a significant advantage for farmers. Using biological cues to monitor and predict changes in growth and wellness could help farmers determine when oysters should be moved or harvested.

“In the normal course of operations, when there are changes in oyster condition, this can lead to product losses or quality downgrading,” he says.

“If the animals’ physiology or behaviour changes, that might give us a head’s up that something has changed in the water column that they’re not enjoying.”

But with real-time sensors in place, farmers could see when stressful conditions might be occurring or imminent and could adjust their animal husbandry and handling more quickly to optimise animal health and product quality.

“Another potential-use case for farmers is to observe behaviours over longer periods and to see how behaviours might provide an early warning for seasonal challenges, such as Pacific Oyster Mortality Syndrome (POMS), or signal water quality changes that affect growth rates through energy expenditure,” says John McCulloch.

Sentinel sensor technology also has the potential to provide cost savings in the monitoring space.

“When you use fixed sensors in the marine environment, there are significant issues with biofouling and it becomes an expensive process of maintenance, with cleaning and calibration,” explains John McCulloch.

“The thought was, maybe we can put an oyster biosensor out there and it won’t need all that cleaning and maintenance, because the animals themselves don’t need us to clean and maintain them. While low-cost biosensors are not yet at industry-level production stage, the project was able to demonstrate proof-of-concept. We were able to deploy oysters with sensors in the channel for 12 months without touching them and were still able to get a clear signal from them.If farmers or managers are able to put a sentinel animal in place, and just let it monitor the environment without having to be hands-on, it has the potential to offer real value, and that’s exciting.”

While the initial FRDC-funded project has been completed, John McCulloch says it has identified where further research is needed to develop commercially valuable information that oyster growers can act on.

This includes a more detailed understanding of how water quality changes impact oyster biology. For instance, when oysters close, their heart rate almost stops. With available knowledge and equipment, it is difficult to know what is going on within the closed shell; however, new designs trialled in the lab can give us those details, John McCulloch says.

Increasing the sensitivity of sensors and collecting data with a finer resolution that incorporates closed-shell biology would allow environmental response patterns to be more clearly distinguished.
The CSIRO team has begun development of an improved prototype with a higher resolution, but it may be some time before we see a final product available for wide use on-farm.

New biosensor technology being developed by CSIRO researchers is helping to engage Tasmanian secondary students with the biology of bivalves and the career opportunities in the marine science and aquaculture sectors. Leader of the aquaculture biosensor research projects is John McCulloch, a senior research engineer with CSIRO’s Data61 division, who says the Marine Discovery Centre (MDC), situated on the D’Entrecasteaux Channel in Woodbridge, is a natural partner in creating learning opportunities using the sentinel oyster sensors.

“We wanted to let young people have a hands-on experience with oyster sensors and teaching units so they can understand the interactions between the animals and environment, and also get inspired about their local marine environments,” he says.

In the past year the MDC has provided two-hour classes for more than 1500 students. Mollusc sessions include bivalve biology, physiology and anatomy, water quality issues, Tasmanian oyster farming, how sensor technology works, and how technology helps industry and environment.

The MDC also has molluscs with biosensors attached in tanks, which allows students and other visitors to see the sensors in action and view live results on a laptop. It provides free, downloadable resources for teachers.