It was the end of a long era when the Gippsland Lakes commercial fishers pulled up their nets for the last time on 31 March 2020.

“It was a beautiful day, blue as far as you could see,” recalls Lynda Mitchelson-Twigg, whose husband and father held licences in the inlet fishery that dates back some 150 years.

“We took our children out and shot lots of video, including our daughter accidentally dropping her fish over the side of the boat instead of in the fish bin.”

The small-scale commercial fishery, which long ago formed the basis of today’s bustling Lakes Entrance fishing community, was closed by the Victorian State Government as part of its Target One Million plan to grow recreational fishing. But thanks to a team of fishers, historians, photographers, anthropologists and curators, the fishers’ stories and knowledge will not be forgotten.

‘End of an Era: the Last Gippsland Lakes Fishermen’ is an interactive exhibition presenting the social and cultural story of the fishery through the images and words of the last 10 Gippsland Lakes fishing families.

Through large-scale photographs and audio, it tells of their connection to the land and sea, and their contribution to fishing communities and the Australian fishing industry as a whole.

“It is about giving them a voice,” says Lynda Mitchelson-Twigg, who led the exhibition project. Her personal connection to the fishery runs deep – right back to the 1880s when her great-great-grandfather began fishing the lakes.

Her husband, Andrew Twigg, and her father, Harry Mitchelson – two of the last 10 licence holders – are featured in the exhibition along with the “soft, croaky and lovely” voice of her great uncle, Frank Mitchelson, who at 94 was the lakes’ oldest fisher, before he passed away in 2020. “This project gives people an opportunity to hear the stories and see a different side to how they might perceive fishers to be,” she says.

One fisher who broke the mould is her late grandmother, Mary Mitchelson, a female commercial fisher on the Gippsland Lakes, who is featured in the exhibition “in her gumboots and beanie” – and who was the catalyst for the project. 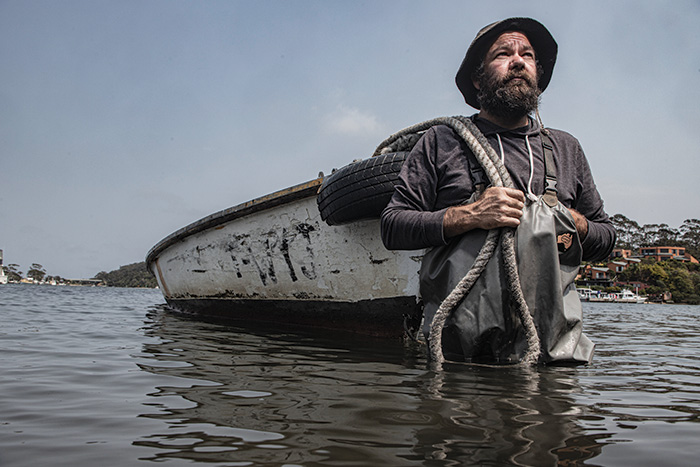 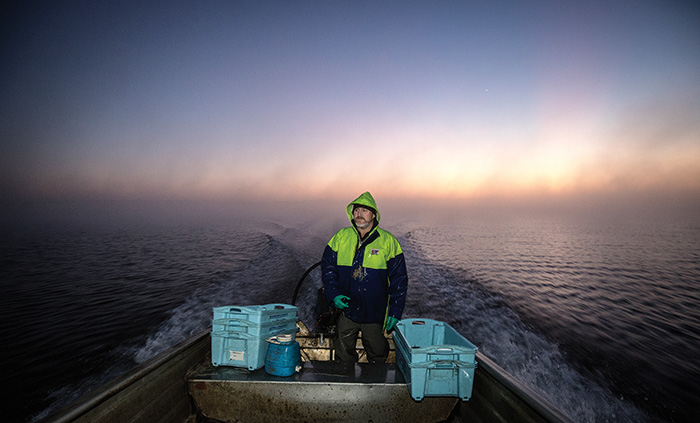 Historian Nikki Henningham, who specialises in Australian women’s history, had interviewed Mary in 2017 for the Invisible Farmer project – the largest ever study of Australian women on the land. So, when she heard about the closure of the fishery, she felt compelled to document the stories of the families who worked there.

“These people have knowledge that goes back through generations to the start of the commercial fishery, and recording their stories will continue to provide a window into an industry that was so strong and the foundation for many small communities,” she says. “It’s about our environmental history, and our socio-cultural history. The death of their industry should not go unnoted.”

What began as an oral history project for the National Library of Australia archives quickly evolved into a public exhibition with support from the FRDC, Deakin University and the University of Melbourne, where Nikki Henningham is based.

In a truly collaborative effort, the project is “a really good example of how academic social science can engage with community to create knowledge”, she says. “And Lynda is the driving force.”

Telling local stories is important, not just for the benefit of the immediate community, but because they add rich texture to our national story and identity, Nikki Henningham says.

“Today, when there are so many global impacts upon us, the stories we can tell about ourselves are crucial to our self-esteem,” she says. “That sense of history and how we belong and how we do things is absolutely vital.”

In the Gippsland Lakes, those stories are of the nooks and crannies of the inlets that provide shelter no matter the wind direction; of the enormous twilight sky full of colour; of catching a morning bus home from Melbourne to step onto a fishing boat in the afternoon; of cold and wet dawns; and of quiet, traditional fishing methods, holding nets by hand.

“It’s an opportunity to share with people who may not have ever known we existed,” Lynda Mitchelson-Twigg says of the exhibition. “It’s also important that people know where their food comes from, and I think as multigenerational operators we have a significant history.” 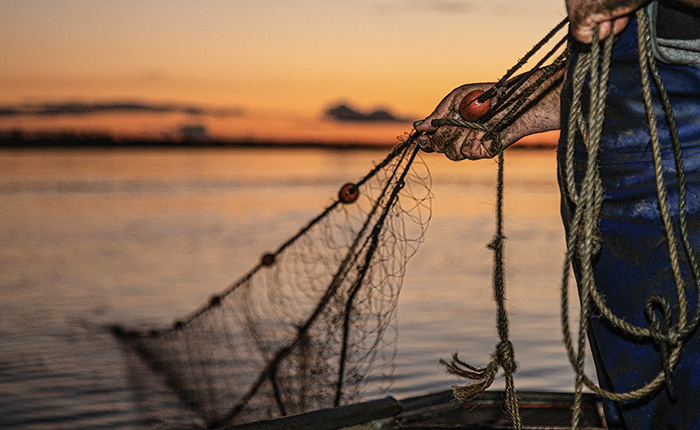 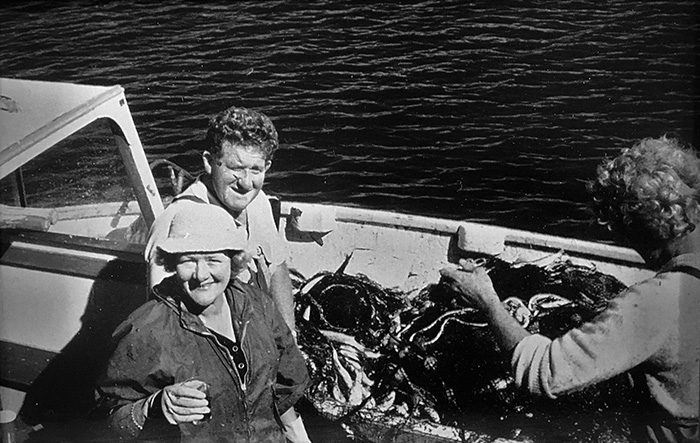 Mary Mitchelson was a pioneering female fisher of the Gippsland Lakes. She is pictured here in the 1960s with her husband Kevin and teenaged son Harry (with the nets).

of the past will not be lost for the future, says Nikki Henningham. “The stories of people who work the land or the waters are as old as this continent. And we’ve got a lot to learn about water management and fisheries management by listening to the people who have worked in those environments, sustainably, for generations.”

As part of the project, Nikki Henningham is also developing a template so other communities can run their own oral history projects to record their experiences, curate material and present it online so their stories remain available for themselves and broader society.

“Those stories of ordinary life remind us of how everyone’s lives are valuable, including your nana who cleaned the fish before they threw it onto the cart, or the old guy who brought the ice in before there was a fridge,” she says.

“It’s about reminding us that ordinary people actually live extraordinary lives, and you might value the lives of everyone in your community a bit more if you talk to them and ask them, ‘what was your town like when you were growing up?’”

The exhibition, originally scheduled for May 2020 to coincide with the fishery’s closure, was postponed due to COVID-19 restrictions until January 2021. After its premiere at the Slipway Lakes Entrance, it will move to the Library at The Dock Gallery at the Docklands in Melbourne and then Deakin University’s Geelong Waterfront Campus.

Lynda Mitchelson-Twigg says while the loss of their industry has taken a heavy toll, she hopes the exhibition will honour and celebrate the men and women of the Gippsland Lakes fishery and provide an insight into their world.  Since the closure some have continued to fish in other fisheries while others have found work in different industries. “It’s a nice legacy for them to have,” she says of the exhibition.

“I am hoping it will do them proud and it will be something all the fishers will appreciate.”