The year 2010 was a good one for the recruitment of Barramundi (Lates calcarifer) in the Northern Territory. It was also a year when the Bureau of Meteorology’s Australian Monsoon Index peaked in response to a big wet season.

The relationship between a good wet season and strong Barramundi recruitment has long been recognised by fishers and researchers, for example, in the FRDC project ‘Tactical Research Fund: topping up the “Crystal Bowl” for Barramundi’. However, new modelling has quantified the correlation, allowing researchers to predict the impacts of future increases in water extraction for mining and agriculture on Barramundi fisheries in northern Australia.

This iconic species is highly significant to the region’s recreational and Indigenous fisheries and supports an important commercial fishery.

Researchers Alison King and David Crook from Charles Darwin University have led the FRDC-funded project to learn more about what drives Barramundi productivity and the potential impacts of increased water extractions in the region. The University of Melbourne’s John Morrongiello was also a crucial member of the research team, helping to develop sophisticated biochronological modelling that incorporates fish age and growth data with different climate and water management scenarios.

They began by determining the age, specifically the birth year, of more than 3000 Barramundi, whose otoliths (ear stones) are held in the Northern Territory’s fisheries collection. The otoliths have been sourced from commercial and recreational catches in the Daly, Mary, McArthur and Roper rivers since the early 1990s.

Otoliths from the collection were put under the microscope and photographed, allowing the research team to count the rings that represent a year of growth. Given the age of some fish at the time they were caught, this has provided information about fish recruitment dating back to 1985.

Identifying the year of birth allows the researchers to match highly productive ‘year classes’ with recorded environmental conditions. They evaluated a range of datasets against the recruitment patterns, including large-scale climatic factors and local river flows. The strongest correlation came from a simple measure of wet season intensity used by the Bureau of Meteorology – the Australian Monsoon Index. River flow also strongly correlated with year class strength, although flow–recruitment relationships were quite complex and variable among rivers. These correlations were independent of the available spawning stock for the species – the stock–recruitment relationship – which often forms the basis of recruitment assessment in fisheries models.

She highlights this as an important finding, in the light of increased demands for freshwater to support economic development of the north. She says there is a common perception that fresh water that flows into estuaries is “wasted to the sea” if it is not harnessed for consumptive uses. However, this research demonstrates that freshwater outflows are fundamental to maintaining fishery productivity, and depend on the strength of the wet season and the resulting river flows.

With more data available from the Daly and Roper rivers, the modelling showed that scenarios of increased water harvesting from these catchments during both the wet and dry seasons strongly affects Barramundi recruitment. The modelling predicted a negative impact in both wet and dry seasons, with recruitment more than halved in some scenarios. For example, extraction of 40 per cent of annual river flow was predicted to result in a 40 to 50 per cent decline in Barramundi recruitment in the Daly River. 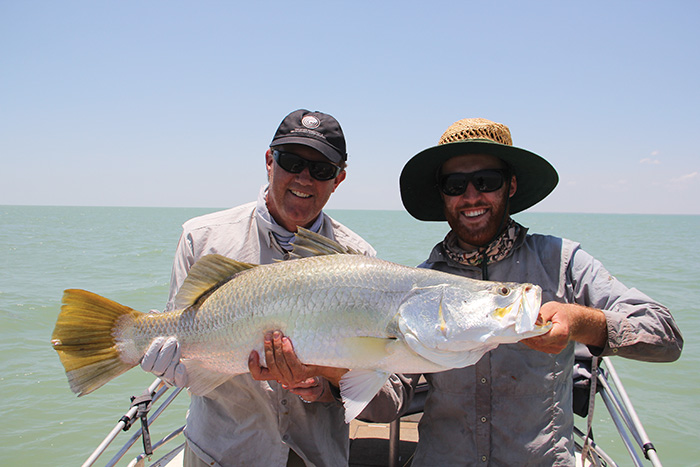 Identifying the relationship between Barramundi recruitment and the monsoon index and river flow provides a valuable reference for fisheries productivity. Other proxies used in the past include river heights that represent a known level of floodplain inundation and satellite images of catchments.

“Inundation of appropriate habitat for juvenile fish allows a whole lot of fish species to reproduce and become productive, which makes the whole ecosystem more productive,” he says.

“You could have really good rainfall in the catchment, but that might not mean more productivity because the bulk of the river remains relatively unaffected. It’s important to get the metrics right, and this project has helped to do that.”

Thor Saunders says the department is reviewing the management of the Barramundi fishery. The new modelling will provide the potential to flag changes in the fishery up to three years in advance; three years is the average time between recruitment and fish reaching legal catch size.

“You could have really good rainfall in the catchment, but that might not mean more productivity because the bulk of the river remains relatively unaffected. It’s important to get the metrics right, and this project has helped to do that.” – Thor Saunders

Researcher David Crook says, as part of the project, the team also examined the influence of monsoons and river flows on the growth rates of Barramundi. The results showed some interesting patterns and suggest that flexibility in the life cycle of individual fish has a strong effect on growth rates.

Related research by Charles Darwin University PhD student Brien Roberts showed Barramundi grow faster when they are living in fresh water than when they are in the estuary or sea. “Given that fish with different migration histories grow at different rates, there’s a lot of complexity in the dataset that we weren’t able to address comprehensively in this study,” David Crook says.

In parallel with the Barramundi modelling, the researchers had also planned biochronological analysis for another high-profile coastal fishery species in the region, Giant Mud Crab (Scylla serrata). The gastric ossicles – calcified mouthparts – have been previously used to age the animals. However, David Crook says this study found no evidence that annual growth rings are retained in the ossicles. Rather, the results suggest the species moults its ossicles with the rest of its shell as it grows. Ultimately, they concluded they could not confidently use the rings on the gastric ossicles to age Giant Mud Crab, and suggested caution is also needed when applying such techniques for ageing other crustaceans.

The researchers say the biochronological modelling techniques developed as part of this project have the potential to be applied across a wide range of other fisheries as well, to identify patterns in recruitment and growth and to help understand the effects of environmental drivers on fishery productivity.