Research trials are being undertaken on land and sea country of the Neunonne and Paredarerme people in southern and south-eastern Tasmania.

This year marks Australia’s first harvests of commercial-grade, farmed ocean seaweeds – the first in September, the second in November. Both harvests, in Tasmania, have occurred under the auspices of the Seaweed Solutions Cooperative Research Centres Project (CRC-P), funded through the Department of Industry, Science, Energy and Resources.

The Seaweed Solutions CRC-P officially kicked off in June 2019 and began work in earnest at the start of this year. Partners in the CRC-P include Tassal Group Ltd, the University of Tasmania’s (UTAS) Institute for Marine and Antarctic Studies (IMAS), Deakin University and Spring Bay Seafoods.

Developing commercial production practices for native seaweeds is part of research that has been underway in Tasmania for four years, with the aim to develop an integrated multi-trophic aquaculture (IMTA) system. Aquaculture company Tassal Group has been the leading force behind this work, conducted in conjunction with its Atlantic Salmon farm operations in the state.

During that project, IMAS researchers led by Catriona Hurd have helped to establish gametophyte-seeding technology for Giant Kelp (Macrocystis pyrifera), a species listed as threatened under the national Environment Protection and Biodiversity Conservation Act 1999.

The success of this work means a ready supply of seed gametophyte stock can be made available for commercial trials. The new propagation techniques may also allow producers to skip the hatchery phase and seed seaweeds directly onto lines to be deployed to sea.

Craig Sanderson says this offers a significant cost saving on the more labour-intensive practices used in many Asian countries where seaweed industries are well established. It will help to make Australian production more economically competitive. 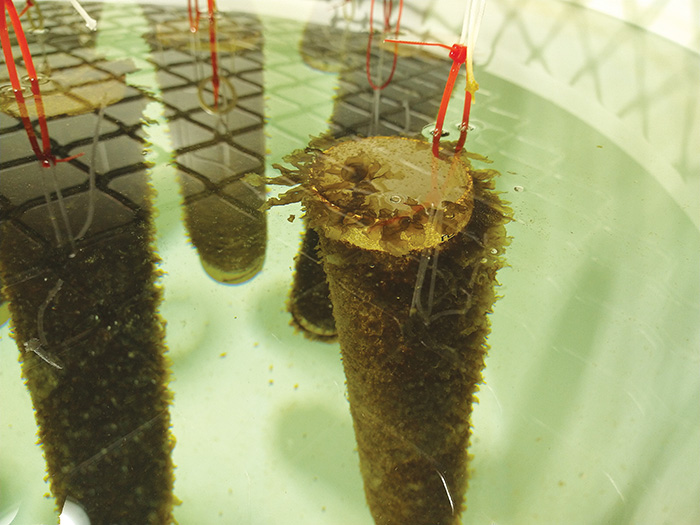 Current Seaweed Solutions CRC-P trials are using gametophyte-seeded ropes at three different locations in south-eastern Tasmania. The primary site is at Okehampton Bay, on a Spring Bay Seafoods site adjacent to Tassal’s fish farming operations. The second site is at Great Taylor Bay, on Bruny Island, on a Tassal aquaculture lease. IMAS holds the lease on another site at Tower Bay, near Dover. As in previous trials, Giant Kelp has remained the most easily established and fastest growing of the three species propagated.

Head of the Ecolology and Biodiversity Centre within IMAS Catriona Macleod says while modest, the harvests are a significant achievement given the many challenges posed by the COVID-19 pandemic.

“We couldn’t have done this without the industry–research collaboration, which is why CRCs are so important. Our next step is to get some product out to the markets and see what they think,” she says.

Deakin University’s Alecia Bellgrove, a specialist in seaweed product quality, says the research team was keen to analyse the composition and quality of the three species harvested.

“We hope this can show us not only the potential of these seaweeds for food and agriproducts, but also how the Australian species grown in clean cool waters off Tasmania differ from those grown elsewhere,” she says.

Other FRDC-funded seaweed-related projects include: