A range of shark deterrent devices using acoustic, electronic and electromagnetic technologies is being put to the test in Western Australia’s shark hotspots 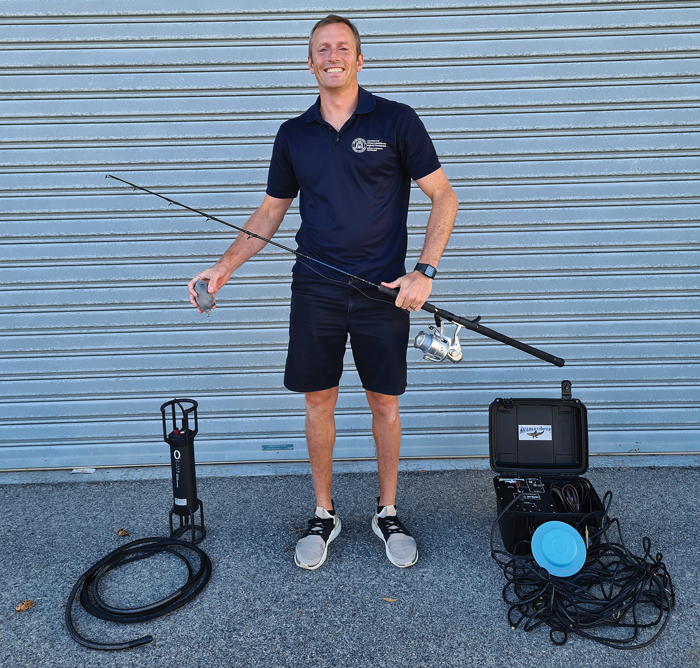 Researchers in Western Australia are trialling deterrent devices designed to prevent sharks feasting on line-caught fish before fishers can land their catch.

Shark depredation, or ‘bite-off’, has been an issue affecting recreational and commercial fishers in WA, particularly in the north-west of the state, for as long as people have been fishing.

However, there has been a noticeable increase in reports of depredation for more than a decade. This is attributed to a range of factors, including tropical shark species moving further south following the marine heatwave of 2010-11 and flow-on effects of management changes implemented since the early 1990s to rebuild commercially fished shark stocks.

WA’s Recreational Fishing Initiatives Fund (RFIF) is supporting the trial of shark deterrent devices, which was initiated following calls from the state’s peak recreational fishing body, Recfishwest, for projects to address the issue.

This current project began in February 2020 and is expected to be completed by June 2021.

Gary Jackson says since about 2015, DPIRD and the University of Western Australia (UWA) have undertaken research to better understand where and when shark depredation is occurring, the rates at which it is occurring and which shark species are involved.

The Greynurse Shark is a protected species.

The current RFIF-funded project has focused on identified hotspots in northern WA, using phone and online surveys to assess recreational fishers’ attitudes to sharks and shark depredation. The surveys are also identifying what recreational fishers do, if anything, to mitigate the problem.

Surveys conducted last year found one in two recreational and charter boat fishers who fished north of Lancelin had experienced shark depredation. Two-thirds of those that had experienced depredation had tried to reduce or avoid shark bite-offs in various ways, most commonly by changing their fishing location.

One in 10 fishers had tried using electronic or magnetic shark deterrent devices.

“The comments and opinions that fishers gave at the end of the survey highlight that shark depredation is a highly polarising issue,” Gary Jackson says. “Some called for urgent action to reduce shark bite-offs by reducing shark numbers. Others argue that sharks taking fish is just ‘part and parcel’ of fishing in the ocean.”

A common concern among surveyed fishers was the loss of a large number of fish and the perceived impact this has on the sustainability of fish stocks in regions where depredation is highest.

“The amount of fish wasted by shark depredation negates the benefits of bag limits at times, as you can have many fish taken before you reach your bag limit and have actually removed well over a bag limit of fish from the environment,” said one respondent.

From another: “I lose seven fish to sharks to the one fish I get in my boat, so if 20 boats do that a day the fish population is going to decrease rapidly because of the shark overpopulation.”
The phone and online surveys also helped to identify one of the devices that is being tested in the current project; several fishers say they use the US-made Sharkbanz. These devices generate
a strong electromagnetic field that interferes with the sharks’ highly developed sensory system, potentially deterring them from getting closer
to the target fish.

The two other devices being tested are the Australian-made Ocean Guardian FISH01, which uses an electronic approach, and SharkStopper, also from the US, which uses acoustic technology.
The Ocean Guardian device creates a three-dimensional electrical field that also interferes with the sharks’ sensory system, resulting in uncomfortable sensations for the shark, which causes them to turn away.

SharkStopper broadcasts the call of the killer whale – one of sharks’ few predators – on frequencies that sharks are particularly attuned to.

All three devices are commercially available and the technologies used by each device have been developed primarily with personal use in mind, to protect surfers and divers from large sharks, which are not necessarily the ones involved in the shark depredation.

“So we are asking the devices to do something a bit different, which is to protect the area around a boat, where people are line fishing for reef fish,” says Gary Jackson.

The gear is tested by going fishing in locations along WA’s coast between the Abrolhos Islands and Broome where recreational fishers have identified that they have problems with sharks
at certain times of year. Underwater cameras are used to monitor the behaviour of sharks relative to the gear being used and the fish on the line.

COVID-19-related travel restrictions in WA delayed the start of the trials in 2020. “Once these restrictions lifted, we were able to get out on the water and begin testing the deterrents and the underwater camera set-ups firstly at the Abrolhos Islands in July, then soon after off Shark Bay,” says Gary Jackson.

“We learnt a lot from these two trips about how to effectively test the deterrents within the experimental design. When we visited the Montebello Islands in August, the trials in waters between 35 metres and 55 metres were very successful and we collected plenty of useful video footage.”

By the end of 2020, researchers had collected 36 hours of footage from 272 camera drops, which are being analysed to identify the sharks and to characterise shark behaviour relative to the deterrent devices used. More field trials will occur at Exmouth and Montebello Islands in March and April 2021.

Once the testing and analysis is complete, a roadshow is planned for June 2021, visiting regional centres to discuss the findings and talk about the issue of shark depredation more broadly with recreational fishers.

Recfishwest will publish the results of the research once they are finalised. Follow Recfishwest on social media or visit the Recfishwest website to subscribe to its monthly newsletter to learn more.