Australian Longline’s new $40 million, state-of-the-art fishing vessel makes a bold statement about the company’s confidence in the future of fishing 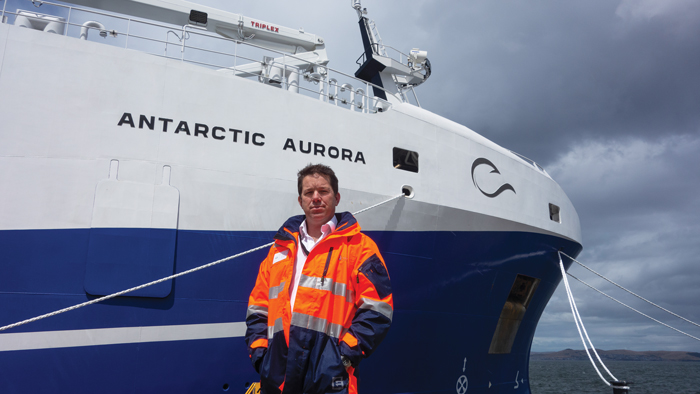 When Malcolm McNeill looks through the panoramic bridge windows aboard the Antarctic Aurora, he is seeing far beyond its base on the River Derwent in Hobart. He is looking to the future – to the long-term fortunes of the Patagonian Toothfish (Dissostichus eleginoides), which this glistening new ship will hunt.

Beyond his own particular fishery, he hopes the investment and the technology embedded into the new ship’s design will inspire confidence in the Australian fishing sector as a whole.

The Antarctic Aurora is a $40-million investment in a 40-year outlook for the Patagonian Toothfish fishery. Malcolm McNeill is managing director of Australian Longline, the company that owns the new ship. He says it is a measure of the company’s faith in the fishery’s sustainability.

It is a confidence, he says, shaped by modern-day resource management and by some of the new technologies embedded into the vessel’s advanced design. The decision to build, not buy, was based on the company’s determination to future-proof the vessel to make a substantial investment in a fishery with a long-term future.

“We needed a ship that could operate safely and efficiently for four-and-a-half months in some of the roughest conditions in the world and, on returning to port, be unloading a premium quality product already prepared and packaged for market,” he says. 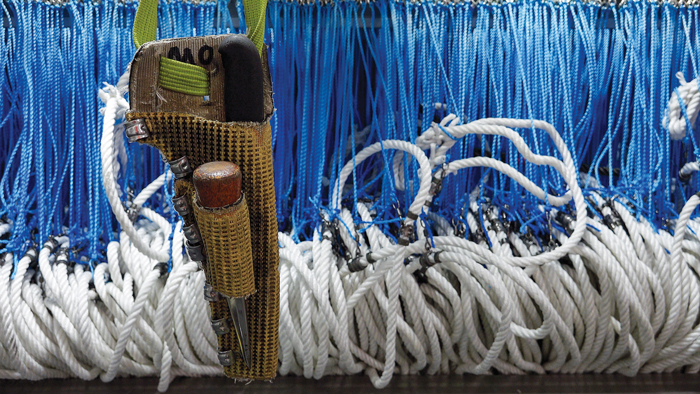 New longlines set up and ready
for use. Photo: Brad Collis

On a tour through the vessel – 62 metres long, 13.5 metres wide – Malcolm McNeill explains that most longline vessels catching toothfish around the world were built for other species and modified for catching toothfish.

The Antarctic Aurora has been built specifically for toothfish and for safely navigating Antarctic conditions, which swing from calm waters strewn with sea ice to months on end of freezing gale-force winds and 10-metre swells.

“Starting from scratch enabled us to incorporate compliance with the rules and regulations that we operate under into the design, along with safety features like increased hull strength.”

The vessel has a hull classification of Ice 1B, an international rating that allows it to navigate through sea ice.

One of the vessel’s major environmental features, as a consequence of this ‘from-scratch’ approach, is its seabird protection – a critical licence requirement.

The fishing lines, which are deployed as deep as 2000 metres, are fed into the ocean up to two metres below the stern to prevent seabirds getting to the baited hooks.

When the lines are retrieved, they are hauled into a moonpool through the bottom of the vessel’s hull; again, deep beneath the surface. From the moonpool the caught fish are pulled up inside the boat and straight into an adjoining processing room. No waste is discarded overboard, with all offal retained in a 170,000 litre storage tank.

The vessel has more than 900 cubic metres of freezer capacity, which allows up to 400 tonnes of frozen fish to be stored over the four months at sea.

“In addition to compliance and safety features, there’s a lot of new technology on this vessel for preparing and maintaining the catch in pristine condition,” says Malcolm McNeill. “When we dock, the fish will already be processed, packaged, barcoded, shrink-wrapped and ready for transfer directly into freight containers for markets around the world.

“This allows the vessel to remain at sea for longer, and we don’t need skilled shore labour, which lowers costs.”

Another cost saving that also lessens the vessel’s environmental footprint is a new diesel-electric propulsion system.

“We haven’t gone down the battery packs route like Austral Fisheries, whose new boat has that technology, but we have set up the Antarctic Aurora so that it needs minimal power to hold its line. We are able to use the engines and motors at the minimum needed to keep the boat moving and for the freezers. It’s all automatic and significantly reduces our fuel consumption.” The Antarctic Aurora carries 770,000 litres of fuel.

This attention to minimising the use of fossil fuels is shared by Australia’s other toothfish operator, Austral Fisheries, whose CEO, David Carter, predicts an imminent consumer backlash against any primary producer – on land or at sea – still burning diesel at current consumption rates.

David Carter says alternative propulsion systems are a major area of R&D investment for Austral. He concurs with Malcolm McNeill about technology and vessel investment being a sign of confidence in the fishery.

“Generally, there has not been a lot of new investment in replacing boats around Australia because of squeezed profitability and lack of clear direction for the sector,” he says.

“The toothfish business, however, has seen strong investment because there’s been good money being made. Where there’s profit there’s confidence to invest.”

David Carter says Austral has come to see avoiding investments such as new boats as a false economy. “The legacy position was to buy any old piece of iron, develop a fishery and try and keep it going with bailing twine and fencing wire … metaphorically speaking. But when we look at the numbers, it’s not the cheapest way to run boats, as the Europeans will tell you. They change their boats every five to 10 years.

“It means replacing the emphasis on fuel and maintenance with depreciation and interest, and as interest rates lower, these sorts of investments more easily stack up economically.”

He says the investment by both of Australia’s toothfish operators reflects confidence in the fishery’s management and the prevention of illegal fishing, which had previously plagued the fishery.

“Added to this is the profit inherent in a high-demand luxury food product that we believe will endure well into the future,” David Carter says.

That said, he is keeping a close eye on global consumer trends. He points to the development of plant-based meat alternatives and the increasing environmental stipulations being imposed on food production generally.

“The past has become a pretty poor guide to our future,” he says. “Our fisheries management is good; the big problems were sorted out 15 to 20 years ago.

“It is factors such as the use of diesel that now loom over us. We have to be wide awake to the inevitability that policymakers will eventually price this.”

But he acknowledges change will be difficult for many fisheries, such as the prawn fishery in which Austral also operates: “Where we use lots of litres of diesel to produce not that many kilos of prawns it’s harder to get excited about a boat replacement program. However, we will need to find fuel alternatives … one possibility being to modify diesel motors to run on green ammonia.”

David Carter says to ignore the reality of consumer pressure on the ‘licence to operate’ is not an option. 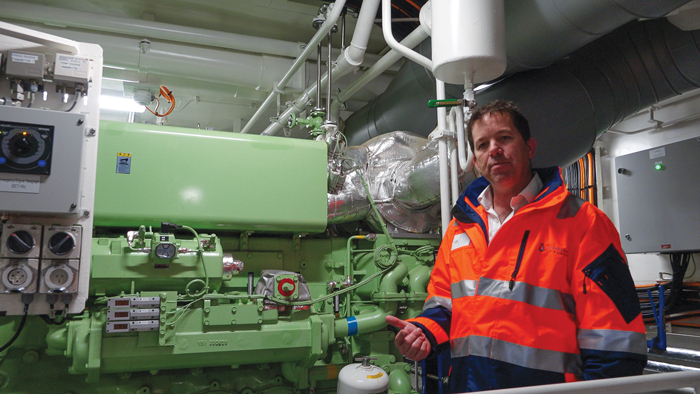 Malcolm McNeill agrees and, like David Carter, is pinning a lot of trust in science.

“For the toothfish fishery we have progressed from a very uncertain future, especially when the pirate boats were operating, to today when we are confident about its long-term sustainability and the science that underpins this,” he says.

Australian Longline and Austral Fisheries share the 3000-tonne Patagonian Toothfish quota for the Heard Island and McDonald Islands Fishery – an Australian territory 4099 kilometres south-west of Perth. Austral Fisheries has the largest share at two-thirds. The two companies also share a small 550-tonne quota in a fishery off Macquarie Island, about halfway between New Zealand and Antarctica.

The Antarctic Aurora has 22 crew, although it can accommodate 30 people, and all vessels carry independent government observers to monitor catches and often scientists as part of ongoing Australian and international fish population research.

“We take our corporate social responsibility seriously,” says Malcolm McNeill. “And that includes investing in skilled crew. About half of the Antarctic Aurora’s crew are newly trained and have never been to sea before, so it is going to be a big adventure for them.”

The first big test for the new vessel, its new systems, and its crew will be a full Heard Island season starting on 1 April. The four-month voyage will be the beginning of what Malcolm McNeill is banking on being a four decade life for the ship … and a never-ending life for the Patagonian Toothfish fishery.

The Antarctic Aurora departed Hobart on 5 January for its shakedown cruise to the Prydz Bay area of east Antarctica.

Australian Longline has a 60-tonne research catch allocation there, which managing director Malcolm McNeill says takes about 20 days to fill – slower than the usual rate of catch and processing because the ship also fulfils research responsibilities.

The research permit is provided to the company by the Australian Fisheries Management Authority (AFMA) allowing it to fish within the Commission for the Conservation of Antarctic Marine Living Resources (CCAMLR) fishery area, under specific conditions.

This includes the use of standardised longline fishing and providing fish biological measurements, tagging and ageing, which is used to characterise the spatiotemporal structure, biomass and connectivity of toothfish populations and inform stock assessments.

In addition, environmental data from conductivity, temperature and depth (CTD) and video loggers contribute to models of toothfish habitat use. These models inform spatial management approaches for Patagonian Toothfish and the conservation of representative areas of benthic biodiversity.

Additional outcomes from the research licence include mapping fishable areas and improved understanding of the distribution, relative abundance and life histories of bycatch species. 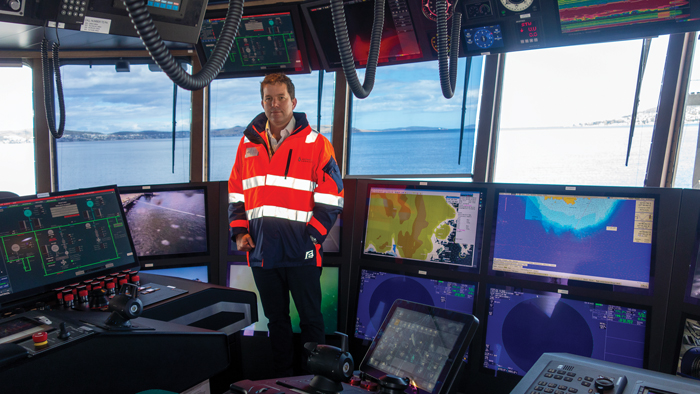 Malcolm McNeill on the bridge of the Antarctic Aurora, which is fitted with state-of-the-art navigation and ocean monitoring equipment. Photo: Brad Collis

In January another Australian Longline vessel, Antarctic Discovery, became the first fishing vessel in the world to be certified to the Global Seafood Assurances Responsible Fishing Vessel Standard (RFVS).

The RFVS enables fishing operations to provide assurance of decent working conditions and operational best practice from catch to shore.

The standard was created by Global Seafood Assurances, a spin-off from the longstanding Global Aquaculture Alliance (GAA), to provide end-to-end quality assurance for all seafood by creating standards where gaps exist. GAA partners with some of the world’s largest food retailers.

The RFVS is a new certification aimed at assuring consumers that seafood supply chains are free of human rights abuses, and that crews are treated fairly, trained and paid appropriately and work in safe conditions.

The 55-metre Antarctic Discovery has a crew of 20 to 25 plus two observers.

The company sees the new certification process as a way to not just “tick the boxes” but to try and exceed accepted best crewing practices, says managing director Malcolm McNeill.

“Being an ex-fisherman, it can be easy to say ‘that’s how I used to do things back then, so you should be able to do the same now’. But the world has changed, so every now and then it’s worth recalibrating the thought process and question: Are we doing it safely? Are we doing the right thing? Are we doing it fairly?

“The people on our vessels are experienced, work hard and are well respected,” he says. “But there is a public perception that fishing crews are treated very badly, so it’s not enough to say we do the right thing. People want proof.

“This certification will enable us to provide customers with independent assurance that we, as their supplier, engage, employ, pay and treat all our crew equally, fairly, and that they are trained in safety.”

Malcolm McNeill says the audit process highlighted “a couple of aspects that we were a bit relaxed on” and which were rectified. “We now have a template for how we should engage and treat all crew now and into the future.”