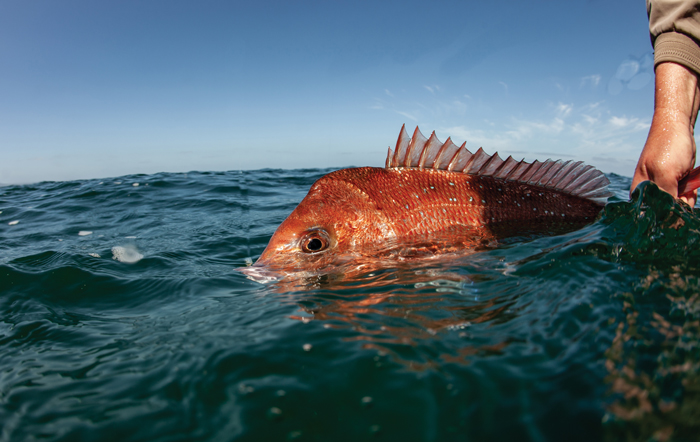 Collective stewardship of the iconic Snapper (Chrysophrys auratus) among sectors has emerged as the most likely framework to coordinate efforts addressing troubling declines in the species around the country.
The FRDC has funded two stakeholder workshops to develop a proactive national approach that may bridge differences in state-based fisheries management and resourcing, and in the status of the stocks themselves.
Snapper is an iconic species for commercial, recreational and Indigenous fishers around Australia. There are 12 independent stocks: six in Western Australia, one in Queensland, one in
New South Wales, one in Victoria, two in South Australia and a common stock shared by South Australia and Victoria.
The workshops have highlighted differences between state approaches and available management capacity, while also identifying management initiatives that have successfully supported healthy stocks.
In the quest for a national strategy, however, workshop participants agreed a broader community approach, extending beyond the specific management and regulatory interventions of a particular state or place, offered the greatest promise for the future of the species.
All workshop participants also agreed on a fundamental first step: to establish community trust in fisheries management by building inclusive partnerships within and among stakeholder groups.
It was recommended that a national and collaborative approach to community-based Snapper stewardship be progressed. This is intended to provide a platform for relevant interest groups – commercial, recreational and Indigenous – to better communicate with each other and collaborate in the recovery of local Snapper resources. Such approaches have already been applied successfully at the state level (see breakout ‘The Snapper Guardians approach’, below)  and for other species, such as Southern Bluefin Tuna (SBT).
These stewardship programs encourage fishers to place a high value on the stock, to only catch what is needed for consumption or for using best practice release methods. They also provide a platform to inform stakeholders and demystify fisheries research and management actions, and ultimately improve trust among all stakeholders.

It was the near collapse of the South Australian stocks that galvanised more recent efforts to develop a national proactive management approach, says Canberra-based fisheries management consultant Nick Rayns.
He was among the participants at the national Snapper workshops that were coordinated by Primary Industries and Regions South Australia (PIRSA) in Adelaide in November 2019 and online in December 2020.
Having a forum that gets all of these people in the same room is quite rare. But the FRDC has funded this process because it saw an opportunity for a national approach to managing Snapper rather than state by state or jurisdiction by jurisdiction,” he says.
The workshops have allowed people to see what others have tried around the country and to set up a collective information repository. Building common ground in areas such as data collection, stock assessment and harvest strategies have proven elsewhere to be the means by which jurisdictions can work successfully together towards sustainability goals. Snapper could benefit greatly from such an approach. To this end, he says the workshops have started the process of using the Status of Australian Fish Stocks (SAFS) reports data and the science behind this to get conversations started with fisheries managers and fishers, both commercial and recreational. An update of SAFS data is expected to be released later this year.
One of the workshop organisers, Keith Rowling from PIRSA, says the challenge with Snapper is the multiple jurisdictions, each with different regulations and histories.
“Also Snapper, unlike Southern Bluefin Tuna (SBT) for example, is not one stock. SBT is a single stock that spawns below Indonesia, migrates around Australia and up into the Pacific. The Snapper population, by comparison, comprises multiple stocks around western, southern and eastern Australia. In some places they overlap and in other places they are quite separate, and that adds another layer of complexity for any national management plan,” he says.

He makes the point that even with an overarching national management approach, there will be subtle differences in each jurisdiction based on the stock’s biology, its biomass levels, its history and so on, because all these factors can vary. “That’s our challenge,” he says.
An example of reproductive biological inconsistency in Snapper is that some populations do not always have fish entering the fishery on an annual basis.
“For example, we have not had a significant recruitment of fish in the Spencer Gulf stock since 1999. That’s 21 years of not having the recruitment needed to carry the fishery through. We have a lot of research investment studying this, but ultimately, a fishery without recruitment reaches a point where it can’t sustain itself.
“And the answer to why recruitment is being impaired is likely to be a complex combination of factors. It could be a change in temperature or changing water flows in and out of the Gulf, or something else like a food chain disruption. And then we have to find out if these changes are affecting the eggs and sperm stage or the larval stage. There’s just so many different stages of the life cycle where Snapper are vulnerable until they grow.”
FRDC-funded research shows Snapper is sensitive to changing climatic conditions such as rising water temperatures. Recent years of low recruitment, which affects stock replenishment, may also be compounded by climate change-related impacts and other changes within marine ecosystems.
One result of this is that Snapper is
extending its range further south; it is encountered more frequently, for example, in Tasmanian waters, but such range shifts are not recognised in current management arrangements.
To help refine strategies, managers have identified the need for further research into
the factors that influence Snapper recruitment, egg production and larval survival for different stocks, as well as a closer account of total fishing mortality, including commercial and recreational catches.
It is planned to hold a National Snapper Workshop every three years for researchers, managers and stakeholders to measure progress, compare approaches and share information. 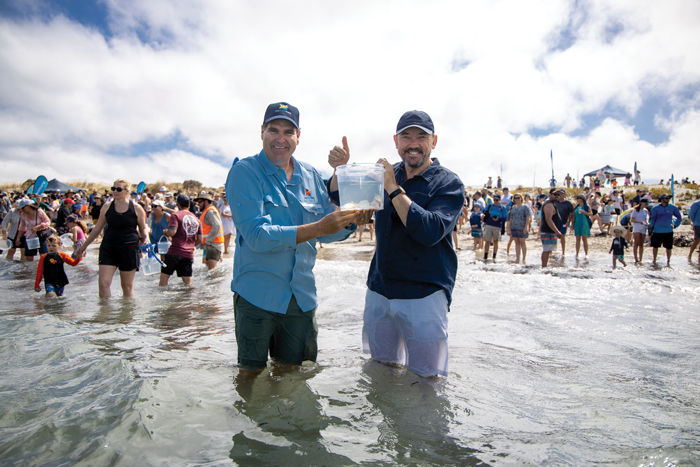 The Snapper Guardians program is run by Western Australia’s peak recreational fishing body, Recfishwest, and centres around an annual or biennial release of juvenile (pink) Snapper into the waters south of Fremantle. The program was initiated in response to community concerns that followed a Snapper fish kill in 2015 in Cockburn Sound – a popular local fishing area. Recfishwest promoted a crowd-funding appeal to raise funds to launch the first Snapper Guardians release of juveniles into the Sound – successfully raising $36,000 in 36 hours. This helped to fund the grow-out and release of 50,000 Snapper into Cockburn and Warnbro sounds in December 2015 and February 2016. Snapper Guardians has become an effective partnership between fishers, the Department of Primary Industries and Regional Development (DPIRD) and the community generally. The program is seen as a successful model for establishing community stewardship over a fisheries resource. Young Snapper are hatched and reared at DPIRD’s Fremantle aquaculture facility from eggs collected in the Cockburn Sound from spawning schools in early summer. Collecting and rearing the juveniles in a protected environment significantly improves the chances of the Snapper making it through to adulthood. Recfishwest holds an annual Snapper stocking event with state government support, which allows the fishing community to be part of the solution in securing the future of the Snapper fishery. An estimated 100,000 juvenile Snapper have been reared and released since the program started.