The combination of a new Traditional Fishing Agreement – the first in the country – and emerging aquaculture opportunities are expected to lead a return to country for the Narungga people of Guuranda, now known as the Yorke Peninsula.

That is the aspiration Klynton Wanganeen has for his people. As CEO of the Narungga Nation Aboriginal Corporation (NNAC), he has been integral to negotiations that will now allow the Narungga people to fish their waters according to traditional and cultural practices.

The Traditional Fishing Agreement between the South Australian Government and the people of the Narungga nation was signed in February 2021. It is effectively a recognition of heritage and the Narungga’s many millenia of connection with their land and sea country.

This area takes in the coastal waters from Port Wakefield on the Gulf St Vincent around the Yorke Peninsula to the Spencer Gulf and north to Port Broughton. 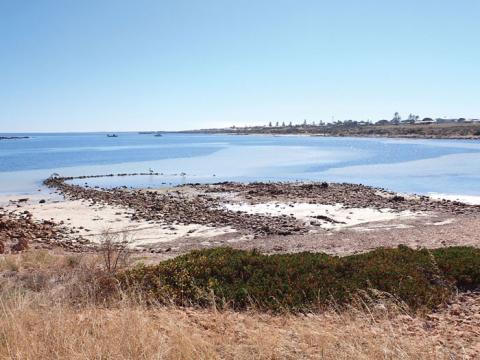 Fish traps such as this one at Port Victoria demontrate the Narungga people’s ongoing connection with country in the region.
Photo: Catherine Norwood

“Fishing is integral to Narungga identity, and Narungga people’s relationship to the fresh, estuarine and saltwater components of our country are considered as interrelated, and fundamental to the understanding of our country as a whole,” says Wanganeen.

“Fishing is not only important to the Narungga lifestyle, it also provides sustenance to Narungga people, and fish and other aquatic species are vital to our cultural and spiritual lives.

“This agreement formalises the rights of Narungga people to enjoy, exercise and maintain Aboriginal fishing practices in a sustainable way – as we’ve been doing as long as we’ve been living on these lands. It also puts in place a framework to support Narungga people to manage their traditional fishing activities, taking into consideration traditional lore and customs.” 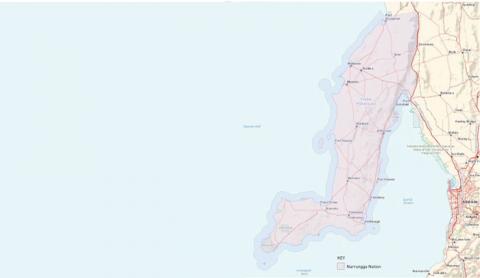 It is through these provisions that the Narungga nation’s efforts to establish aquaculture activities such as the farming of Asparagopsis seaweed is being supported. The location of the Narungga’s first leases approved for seaweed aquaculture are at Port Victoria on the Spencer Gulf side of the Yorke Peninsula.

Although he has lived in Adelaide for many years, Wanganeen grew up at Point Pearce and Port Victoria with an intimate knowledge of the local seafood abundance. He shares stories of learning to spear fish, of walking at low tide between islands, or swimming when the water was too deep. Stories of seals rocketing by beneath the water and of dodging sharks that come to feed on seals – Great Whites, Grey Nurse and Hammerheads among them.

Port Victoria is one of only several locations involved in seaweed trials in partnership with CH4 Global and the FRDC (see story page 28). But for the Narungga people there is more at stake than the development of a new crop or product. Wanganeen sees these developments as important steps towards new opportunities, jobs and skills for the Narungga community.

It is part of a larger picture the NNAC is working on to create commercial marine and fishing enterprises that will allow those who have left their country to return, and will also provide jobs for long-term unemployed people still on country.

He highlights the need for good governance of these initiatives to ensure the benefits accrued return to the community, given that marine leases and licences are held on behalf of the community as a whole, not for the benefit of individuals.

Among the NNAC’s other initiatives is a three-year development licence, with a seven-tonne quota for the harvest of the large sea snail Lunella undulata, known locally as warriner. The quota is one step, says Wanganeen. Another is having divers with the skills to collect the warriner and then developing a market for the product.

Each step comes with its own challenges. For instance, having gained the three-year licence and quota, which expires this year, coronavirus restrictions suspended plans to work with a diver from Port Lincoln to teach young Narungga people the necessary skills, and these plans have yet to be reactivated.

The NNAC also has a five-hectare oyster lease at Stansbury, acquired from a local oyster grower. However, the infrastructure needs upgrading before it can be returned to production, potentially growing both Native Oysters (Ostrea angasi) and Pacific Oysters (Crassostrea gigas).

There are ambitions for commercial abalone fishing and farming, mussel farming and the wild harvest of finned fish and purple sea urchins, if the NNAC can gain the appropriate licences or quotas.

In wild fisheries where quota has already been fully allocated, it often remains controversial and difficult for Indigenous communities to regain access. Wanganeen is all too aware of the angst that comes from simply reallocating fishing rights.

From that perspective, an emerging industry such as seaweed provides an equalising entry point for new players; everyone in Australia is a new player. As Wanganeen contemplates the coast around Port Victoria for a suitable shore base for future aquaculture operations, he is optimistic that successful trials will lead to new facilities that will in turn build momentum to help revitalise the Narungga community.

The agreements and activities discussed in this article relate to the land and sea country of the Narungga people of Guuranda, the Yorke Peninsula, South Australia.