Since 1992, the World Fisheries Congress has brought the global fishing community together to tackle problems through sharing knowledge and solutions. Ahead of the 8th Wowrld Fisheries Congress, a virtual event coordinated from Adelaide from 20 to 24 September this year, FISH magazine asked marine ecologist Keith Sainsbury to compare fisheries management now with 25 years ago, when the congress was last held in Australia. 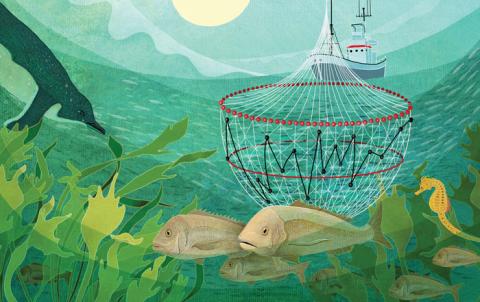 At the time of the 1996 congress in Brisbane, Sainsbury had already spent years helping to develop management strategy evaluation (MSE) methods, which use computer simulations to ‘road test’ fishery monitoring and management plans.

A lot has happened since then, he says. “For example, evaluating fisheries management by simulating and implementing harvest strategies is now pretty much standard practice, and there’s been a general improvement in global fisheries standards.”

This includes adopting ecosystem-based fisheries management (EBFM) globally, with varying degrees of success. EBFM is a holistic approach that considers the health of all species, including inter-species interactions, the effects of environmental changes, pollution and other stresses on habitat and water quality.

“We’ve made a lot of progress on single-species fishery management, and we are improving ecosystem-based approaches to management. But we’re not there yet,” Sainsbury adds. The cost of data collection and the associated monitoring remain a challenge.

At the 1996 Brisbane congress, the issue of bycatch was unexpectedly highlighted when a protestor chained herself to the venue doors to raise awareness of seahorses and their increasingly precarious existence resulting from both targeted fishing and as bycatch of trawl fishing.

“There are ways of tackling these bycatch issues now,” Sainsbury explains.“The Australian Fisheries Management Authority (AFMA) does ecological risk assessments for more than 5000 bycatch species and is able to manage high-risk species. The risk assessment methods were not available back in 1996.”

As a commissioner of AFMA for 16 years, Sainsbury supported bycatch management as part of the broader EBFM approach in Commonwealth fisheries. However, its application across all Australian jurisdictions has been a “mixed bag”, he says, with some fisheries applying it well and others hardly at all.

In Commonwealth fisheries, AFMA must report its progress on managing bycatch, but not all other jurisdictions have clear processes regarding bycatch and discarding, and the reporting of these activities.

“Western Australia also does a good job of this,” says Sainsbury. “Some states don’t do this well and some just report bycatch they’re concerned about, but not other species. This is where you get people chaining themselves to the door.”

Issues such as bycatch management, including the practice and impacts of discarding, are important to another initiative that has emerged during the past 25 years: the Marine Stewardship Council (MSC). It was officially launched in 1997 as an international, independent non-profit organisation with a mission to establish a sustainable fishing standard. Today, 446 fisheries globally, including 20 in Australia, are certified as sustainable.

Sainsbury was on the MSC Board of Trustees for 12 years and remains a member of the MSC Technical Advisory Board. He is well known for his championing of the Marine Stewardship Council approach and certification process.

The MSC requires the fishery to achieve a good score on each of three principles – sustainability of the target species, ecosystem/bycatch management and fishery governance – and to have an auditable ‘chain of custody’ between fish capture and fish sale to the consumer.

“You can look at any of those with MSC certification covering Commonwealth and state-managed fisheries and they all demonstrate good practice,” Sainsbury adds.

Sainsbury also sits on the advisory panel for Australia’s Status of Australian Fish Stocks Reports, the fifth edition of which was released in June 2021. (The first reports were published in 2012.)

While he acknowledges the value of having the Commonwealth, state and territory jurisdictions publish national status reports, he is critical of the low threshold of ‘sustainability’ applied – a sustainable rating typically requires just 20 per cent of unfished stock abundance (or biomass) – rather than the higher international definitions, such as maximum sustainable yield.

Sainsbury also sees room for refining the ecosystem-based approaches to fishery management and expects that to be a big focus of the 2021 congress.

“We’ve developed good indicators around target species, bycatch and habitats, which can help us understand parts of an ecosystem. The thing we’ve never been able to pin down properly is how we get some indicator for the sustainability of the ecosystem as a whole and link that to management. That’s the big science challenge. Sustainable marine ecosystems go beyond how a fishery is managed,” he says.

“Changes in a fishery must be managed in this wider context in which attribution of impacts is difficult.”

Sainsbury says the level of environmental activism around global fisheries, and the need for social acceptability or social licence, also remains high.

“There’s a broad, social interest in what happens in fisheries and the marine environment. How we include those interests in governance arrangements is going to be quite important. For example, the interactions between commercial and recreational fishing are big issues,” he says.

He argues that generally Australia has done well in fisheries management over recent decades because of a good policy framework and science capability.

However, Australia – and the world – now face different challenges.

“I don’t think that management has kept up with the needs. Australia was early to improve fishery policy and science, and that improved management.

“The challenge now is twofold. At one end, the challenge is to bring the ecosystem-based approach more properly into focus and application. At the other end, we’ve still got jurisdictions that just aren’t doing management very well, so we must lift that tail,” he says.

“The real, global challenge will be developing new tools for effective ecosystem-based fishery assessment and management, and it’s where I’m putting much of my effort now.” f