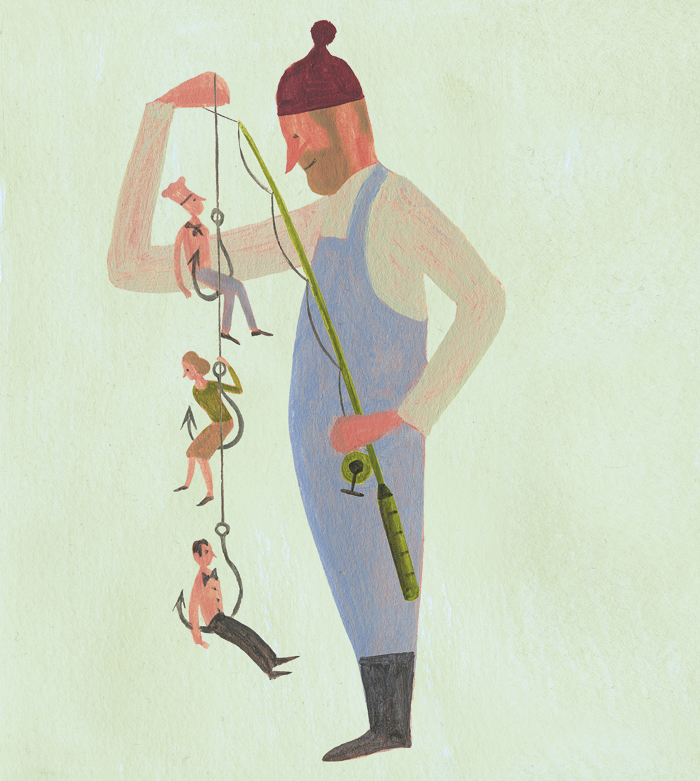 A multidisciplinary team of researchers from two universities and CSIRO has identified the steps that the Australian seafood industry could take to seize on and mitigate the pressures of climate change and other major risks to industry health.

These steps, which include diversification and cross-investment, hinge on improved communication between fishers and the rest of the supply chain, and between sectors that have long considered themselves to be in competition.

The outcomes from the FRDC-funded project highlight that fishers and farmers are perceived by the rest of the supply chain as the place where environmental impact should be managed.

“While there has been a focus on what fishers can do, we think there are also a whole range of things that marketers can do, that distributors can do, that retailers can do,” says Alistair Hobday, principal research scientist at CSIRO, who led the project. “To me, a key finding is that fishers need to start having conversations with people further up the supply chain.”

Improved cooperation across the supply chain could not only reduce the overall carbon footprint, but could also boost the value of a product in varying conditions.

“Imagine if a fish is declining in abundance. If you get no help up the supply chain, all you do is sell less of your product. But what if the supply chain helps you add value to it, or sells it into a market where it receives a higher price?

“Or, in the case of an increase in catch, where the price usually drops, if processors and distributors and marketers are aware of a glut of product, they can think about strategies to send it to different markets, or storage options that will let them supply that species for longer.”

Unlike many projects related to the effects of climate change that largely focus on the biophysical impacts on species’ location and catch rates, this project considers other key influences such as market perception.

“There are new species arriving and new opportunities for fishers in some parts of Australia. But even for the existing species that might be challenged, there are still opportunities for growth if you consider the whole supply chain,” Alistair Hobday says.

A team of 18 researchers from CSIRO, Queensland University of Technology and the Institute for Marine and Antarctic Studies at the University of Tasmania conducted the project, with seven different seafood sectors serving as case studies: Southern Rocklobster, Tropical Rocklobster, Western Rocklobster, Sydney Rock Oyster, wild prawn, the Commonwealth Trawl Sector and prawn aquaculture.

To pinpoint areas demanding particular focus, researchers mapped vulnerabilities in the supply chain using network analysis, a methodology commonly applied to studying food webs or social networks. These weaknesses provide a discussion point for each sector as to how it could mitigate risk, Alistair Hobday says.

“We used network analysis to show where the most critical links in the chain are. And those vulnerable links are places where, if you had a shock or a break to those links, the delivery of product to the consumer could be disrupted,” he says.

“For different fisheries, those things happen at different points in the supply chain and so we don’t have a generic answer.”

In the Tasmanian Southern Rocklobster fishery, for example, 95 per cent of product travels interstate via Burnie and Hobart airports, to both domestic and export markets. An airport strike could completely interrupt the supply chain. Appropriate risk management would centre, therefore, on establishing contingency measures for shipping the product via sea, or ensuring sufficient holding capacity existed close to the airports.

In the tropics, Mother Nature is a major threat. “After Cyclone Yasi, most aquaculture farms survived the actual hit of the cyclone, but then either lost power because they didn’t have enough fuel on their farms to run pond aerators, or the roads were closed and they couldn’t get the product through to market quickly enough.”

For some premium products, the risk lies in heavy reliance on the lucrative Chinese market. All of these vulnerabilities are complex to resolve. For example, to diversify seafood distribution out of Tasmania could introduce additional costs.

“That’s a really hard thing to do, though, because economically it’s really efficient to put things through one point. If it breaks you’re in trouble, but if it works you’re doing really well. And people don’t really want to make that change until it breaks,” Alistair Hobday says.

In terms of spreading risks related to cyclone damage, he suggests that a possible solution might be for prawn farmers from different regions, such as Townsville and Mackay, Queensland, to reciprocally store some of their product at each other’s sites. If a cyclone hits, product from each business would therefore still be available for market, maintaining farm income.

For the lobster industry, a decision could be made to collectively target a small portion of product to another market that is less lucrative than China.

For example, the US market mainly demands lobster tails, which are lower value than a live animal. But if all lobster fishers decided to place a proportion of product into this market to develop it, nobody would be left at a comparative financial disadvantage, and the risk would be spread.

The researchers also conducted a market analysis of the case-study sectors to identify key points of competition and correlation. They identified points where the market sees different products as like, even though the fishers may believe themselves to be in competition.

For example, Australian wild catch and aquaculture products together compete against imports in the domestic market. Australian prawns in particular, whether farmed or caught, are perceived to be on par by consumers.

“The sectors sometimes think that they need to outcompete each other. But really our analysis shows that those two sectors could work together,” Alistair Hobday explains.

These perceived similarities in the market produce surprising effects in the relationship of supply and demand, as demonstrated by the three species of Australian rocklobster, for which prices correlate.

“If, under climate change, we saw one species of rocklobster become less abundant, you might think, that’s alright because the price is going to go up. But if the market sees two products as equivalent, change in one of them will not necessarily give you the expected price increases,” Alistair Hobday says.

“We looked, for example, at rocklobster exports to Hong Kong. And although Australia exports three different species into Hong Kong, and each one is priced differently, they’re all correlated with each other, and changes in the price of one may lead to a shift in the alternative species.”

Alistair Hobday argues that fishers and fisheries that harvest similar products would benefit from increasing cooperation to capitalise on market opportunities and to spread risk.

He also believes that wild-catch fishers and farmers of similar products, such as prawns, could increase cross-investment to spread their risk. In addition to providing a diversified business portfolio, this would ensure that, where one sector was affected, such as prawn farmers were by Cyclone Yasi, prawn product would still be supplied and maintain its foothold in the Australian market.

“Despite the observed and expected impacts of climate change, seafood producers do have growth opportunities if coordination is improved across seafood supply chains, risks are known and managed, and consumers continue to value Australian product.”

The report Growth opportunities and critical elements in the supply chain for wild fisheries and aquaculture in a changing climate is available from the FRDC website, along with fact sheets for each sector.

The assessment of the carbon footprint of each of the seven supply chains involved in the climate change–supply chain report was led by Bridget Green, fisheries scientist at the Institute for Marine and Antarctic Studies at the University of Tasmania.

“We looked at the biophysical impacts – so chemical waste, fuel use, air pollution, water use – but not for fishing only, because seafood is not just about fishing. It’s about everything that happens from capture of the fish to delivery to the restaurant,” Bridget Green says.

Overall, the Australian seafood industry emerged as having a lower carbon footprint than land-based food industries such as cattle farming, with water use and nitrous oxide pollution low.

Bridget Green says this is partly attributable to the large boats used in trawl fishing, provided that they record good catch rates.

“It’s also a bit to do with the behaviour of the species. Banana Prawn are a schooling species so you can be quite precise in how you target them, and the Commonwealth Trawl Sector is the same, in that they target schools.”

But there were usage areas that the industry could consider if aiming to reduce its carbon footprint.

Processors had the highest freshwater consumption, largely related to cleaning the factories, with water recycling a possible option.

Meanwhile, fisheries harvesting a live-export product had a significantly larger carbon footprint, with airfreight transport contributing to about half of that overall impact.

Bridget Green emphasises that these are high-value products that attract premium prices in Asia, where maximum freshness is desired, and that they constitute only a small component of the industry and emissions.

Nevertheless, she says these findings present opportunities for reviewing export transportation, where practical.

“In things such as the Tropical Rocklobster, the product is flown from the Torres Strait down to Cairns and then back up to Asia, so there’s a little bit of doubling up there. At the moment it’s probably not possible to fly directly into Asia because the infrastructure isn’t in the Torres Strait, but we identified that as a potential way to reduce the impact of flying.”