Far from being a dwindling resource, Australia’s wild fisheries have the capacity to provide double the volumes currently harvested

In recent years, Australia’s wild harvest fisheries have averaged a yield of 166,000 tonnes, a decline of almost 30 per cent on our ‘peak fish’ production. That was in 2004-05, when we harvested 236,000 tonnes.While some continue to attribute the reduction in yields to dwindling fish stocks, there has been a substantial investment in fisheries research and management over more than a decade to ensure this is not the case.

More fish in the sea 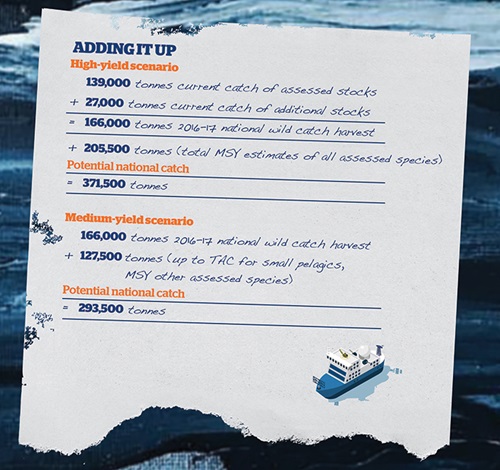 In a recent FRDC-funded project, led by the CSIRO, researchers identified that current fished stocks, rebuilt to the baseline where necessary, could allow for double the current harvest, which would set a new peak for the industry.

The project team, led by David Smith and Rich Little, included fisheries scientists from each jurisdiction, who calculated the maximum sustainable yield (MSY) for 290 fish species and stocks (as some species have multiple stocks).

This allowed the team to estimate what the biomass and sustainable harvest volume could be for each of these species. MSY was used as a consistent reference point for the calculations (not as a recommended target for fishing). In practice, some jurisdictions and species have different reference points, such as maximum economic yield (MEY).

The project used a three-year catch average as the basis for calculations, which also includes 27,000 tonnes of fish from stocks that were unable to be assessed as part of this project.

Small pelagic species such as Australian Sardine, mackerels and redbait were big contributors to the potential increase, although, in practice, the total allowable catch (TAC) set for these species is highly conservative. This reflects the role these species play in the ecosystem: they are the foundation of the food chain for many ocean species, including birds and mammals.

Recognising this, the researchers also recalculated the potential national catch using the current TACs for the small pelagic species rather than MSY, adding this to the MSY total for the other assessed species.

The project did not take into account any changes to fish biomass that might result from climate change, nor the development of any new fisheries or harvesting of other products, such as seaweeds. It was also based on all fish stocks being above a reference point that achieves MSY, including some species that are not currently assessed as sustainable, such as Snapper (South Australia) and Blacklip Abalone (Central Western Zone, Tasmania), which will need to rebuild their populations.

With so many uncaught fish potentially available for harvest, the FRDC and its partners are also investing in other projects to identify barriers and increase the market demand and value for these species.

Market forces are widely recognised as one reason why Australia does not catch as many of the fish as it could; simply put, it costs more to catch them than fishers can earn for them.

The FRDC’s latest project on lesser-known species is being developed by Ridge Partners and looks at opportunities on the east coast, particularly those for NSW fishers. Project partners include the Professional Fishermen’s Association of NSW and Sydney Fish Market.

Consultant Ewan Colquhoun has identified 10 priority species, in conjunction with industry partners. It was agreed that there was potential to increase the catch of these species and also opportunities to value-add to the catch. The species identified are Royal Red Prawn, Ribbonfish, Australian Sardine, Gould’s Squid, Blue Mackerel, Silver Trevally, Yellowtail Scad, Sea Mullet, Luderick and Ocean Jacket.

He has also calculated the currently uncaught portion of quota and the potential increase in value that could be achieved from value-adding to an increased catch for these species. This was estimated at an additional 17,750 tonnes of catch, with a potential value-added return of $83.5 million.

The highest potential return comes from increasing the catch of Blue Mackerel, for which there is substantial uncaught quota (Table 1). For several other species, demonstrated value-added products also indicated improved potential returns from an increased catch.

While the research is not yet complete, Ewan Colquhoun says it has identified a range of issues along the supply chain that prevent greater returns being realised.

Commodity approach: Seafood is the world’s most traded commodity, but an undifferentiated commodity product approach prevents the recovery of greater value.

Quality: Fishing processes and equipment are often not adequate to maintain the quality of the catch, and lower-quality fish have reduced returns that make the catch financially unviable. There is a lack of incentives to encourage and reward efforts and maintain fish quality.

Quota obligations: The current quota management arrangements in Australian fisheries allow quota to be held in perpetuity. Current arrangements may not encourage new investment in improved fishing or market development for large volumes of uncaught quota.

Supply chain: Australian seafood supply chains are often long and complex, and are also consolidated in the hands of a few major players. This occurs in the wholesale market, in processed product distribution chains, and at a consumer level, via the major supermarkets.

Supermarket power: More than 60 per cent of consumers regularly shop for seafood at supermarkets, which have a preference for year-round consistent product offerings. The variability in the supply of wild seafood reduces supermarket acceptance of these products, and therefore limits consumer exposure.

To address these challenges and barriers, the FRDC has funded similar projects in other states, as there is interest nationally in making more of lesser-known species. The potential benefits from doing so include greater economic returns for fishers, and more seafood diversity and low-cost options for consumers. Spreading harvesting effort across a larger number of species, as opposed to targeting a narrow group of high-demand species, would also improve sustainability.

Balance our trade: Replace some of the 70 per cent of imported seafood with local fish.

Take responsibility for fishing impacts: We can influence what happens in our own fisheries.

Importing seafood also effectively exports our responsibility for the impacts of seafood production to other countries where management practices may not meet the same standards as those in Australian fisheries.

Food security is not high on Australia’s national agenda, although this could change in coming decades as the world population increases at the same time that environmental and climate changes are reducing the productive capabilities of land-based food systems.

Reduced capacity, along with changing political alliances, could reduce our access to the imports we currently rely on.

Additional fishing of Australian resources may be needed to supply the domestic market. Organisations from other countries could also buy quota and fish our waters to feed their own populations.

The combined value of fishing and seafood processing to the national economy in 2017-18 was $5.3 billion, with a farm-gate value of $3.2 billion, according to new research on the economic and social contributions of the industry.* The sector also employs more than 24,000 people directly and indirectly. Additional fishing activity could generate more activity and increase the return from our fisheries – a resource owned by the Australian people – to the Australian people.

*Australian Fisheries and Aquaculture Industry 2017/18: Economic and Social Contributions Summary, (FRDC 2017-210) conducted by the Institute of Marine and Antarctic Studies at the University of Tasmania, for the FRDC.

Uncaught quota    700 tonnes
Achievable beach price    $3.50/kg
Additional value     $2.45 million
Action needed: Development of processing and consumer-ready products, which will be supported by the addition of Gould’s Squid to list of seafood species eligible for import to China.