The redevelopment of the Sydney Fish Market 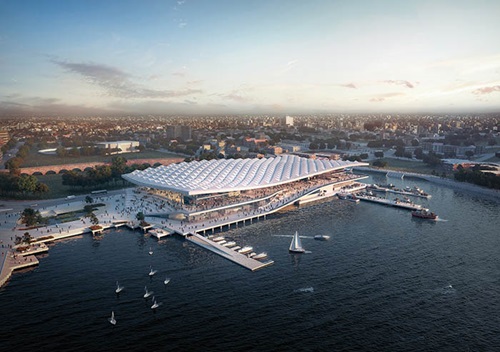 The redevelopment of Sydney Fish Market (SFM) has been more than five years in the making, finally receiving the funding green light in September this year.

The NSW Government has approved $750 million for a new facility at Blackwattle Bay, a site adjacent to the market’s current location. Works are expected to begin in late 2020, with the new market to open in 2024.

The redevelopment will create new value for the seafood industry, Sydney residents and a growing number of national and international tourists.

The new SFM will provide the seafood industry with the latest technology, to ensure fishers and fishmongers can maintain the quality of their seafood and trade it as efficiently as possible. Each year the market auctions about 13,500 tonnes of wholesale seafood.

The distinctive design for the SFM redevelopment comes from Danish architects 3XN, in partnership with Sydney firms BVN and Aspect Studios. It includes a wave-shaped, scale-patterned roof that pays homage to the fishing industry. Another feature will be a public viewing area for the wholesale auctions to give visitors a deeper understanding of the seafood supply chain.

As the Southern Hemisphere’s largest fish market, SFM is a major national tourist destination that already attracts about three million visits a year. With expanded capacity at the new site, visitor numbers could double to six million a year.

The new design will allow more people to experience the quality and diversity of Australian seafood and will showcase sustainable fishing practices and the hard work of fishers. It will also offer inspiration to visitors, encouraging them to visit the coastal towns that are the source of the seafood on offer.

The new SFM is part of a more extensive redevelopment of Pyrmont harbourside area, including more public space, more dining options, boardwalks and a ferry pier – all designed to create stronger connections with the local community.

Overseeing the redevelopment will be SFM’s newly appointed CEO, Greg Dyer, who takes over from retiring general manager Bryan Skepper. Greg Dyer comes to SFM after four years as CEO of the City of Parramatta Council, where he instigated the $2 billion Parramatta Square urban renewal project.

“Sydney Fish Market is an iconic destination for Sydney, with an incredible history tied to the city’s growth and its culinary diversity.

I am genuinely excited about the opportunity to take the helm at a pivotal time in the organisation’s history,” he says.

Bryan Skepper officially retired in September 2019 after a 44-year career with the market, although he is continuing in a part-time advisory role in the lead-up to the redevelopment.

The redevelopment design aligns with SFM’s purpose: to unite people and the sea. “Championing the reputation of the industry is very much a part of this,” Greg Dyer says.

As well as the physical connection to the water at the site, SFM will also promote connections in terms of seafood supply and knowledge about the marine environment, sustainability and fisheries management.

In addition to the more visible auction area, an interpretive centre is being planned to tell the stories and show the history of the seafood industry to visitors.